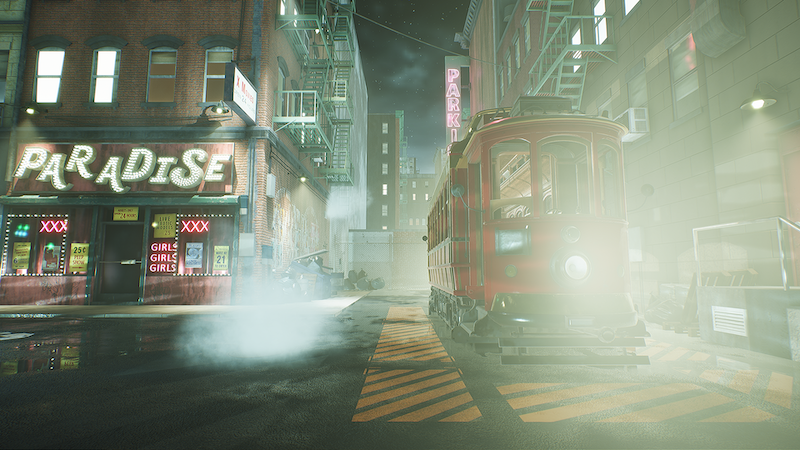 Being a Rift Sweeper isn’t all fun and games. Sure you get to hang out in a bar and travel on a reality-hopping train, but you also have to fight a hideous assortment of monsters as you try to keep reality from more or less undoing itself.

Did I mention there’s pizza though? I guess that kind of makes up for a lot.

As a Rift Sweeper, step into the shoes of nimble rifleman John or deadly sniper sharpshooter Simon. Travel through time to vanquish hordes of grotesque creatures in between bites of mouthwatering pizza. Complete missions, get paid, and level up your abilities to become the best there ever was – past, present, and future! A third character, the gatling gun-wielding James, will join the crew during Early Access, with more slated for final launch. The universe of Rift Sweepers is being built in Unreal Engine 4.

As you can see, Rift Sweepers is not only looking pretty nice, but it’s also quite tongue-in-cheek. The game’s co-op action is highlighted by a wide-ranging backdrop too, with missions stretching across subways, sewers, a “cyber restaurant”, and the tomb of a long-dead sorcerer.

In between missions, players will await their co-op partners in a bar that sits in a dimensional hub of sorts. It isn’t just for the aesthetics either, as purchasing certain drinks will give your character buffs for his or her next mission.

And it sounds like you’ll need all the help you can get, as the bestiary looks to be pretty deep. It actually reminds me a lot of Serious Sam, with an incredibly varied assortment of enemies that includes “daunting goat wizards, fire breathing dragons, devilish clowns, and more – from around the cosmos”.

From Korean developer and publisher JOFSOFT, Rift Sweepers will be landing on Steam’s Early Access service this September the 8th. There’s no release date as of yet for the full retail release, but it definitely looks like a title to watch.

Jason's been knee deep in videogames since he was but a lad. Cutting his teeth on the pixely glory that was the Atari 2600, he's been hack'n'slashing and shoot'em'uping ever since. Mainly an FPS and action guy, Jason enjoys the occasional well crafted title from every genre.
@jason_tas
Previous Gamescom 22: The first big story expansion for Dying Light 2 arrives next week
Next Bungie talks season 18 of Destiny 2, with a special showcase next week