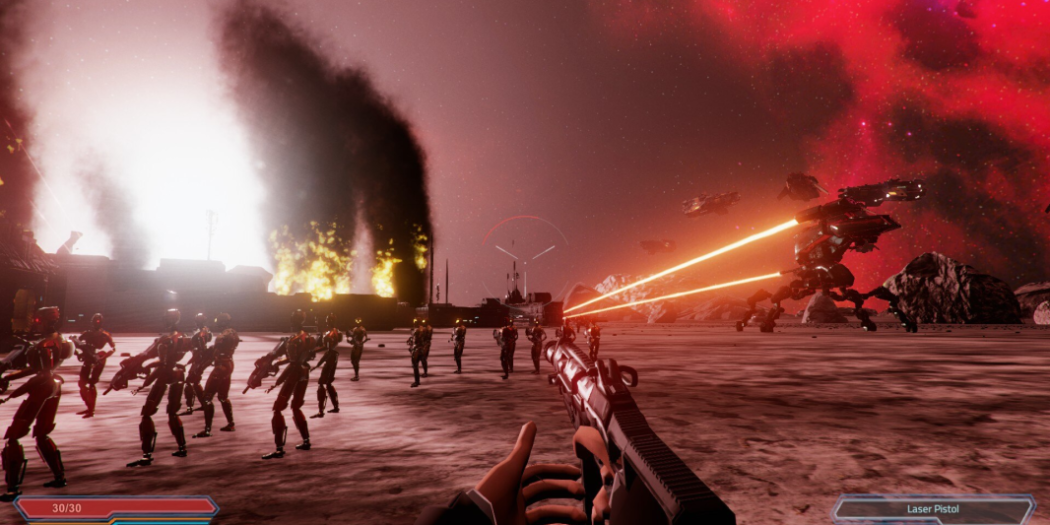 Out now in Early Access on the PC, Executive Assault 2 brings together real-time strategy and first-person action for a sci-fi battle between mega-corps.

Executive Assault 2 is an indie Real Time Strategy / First Person Shooter hybrid set in space, in which you take the reigns of a powerful interstellar corporation as its CEO, working towards gathering resources and materials and dominating rival factions for wealth and tech in a galactic wild west of chaos and lawlessness. But you can also jump into the boots of individual units to take business in your own hands, defending the interests of your corporation against enemy companies with your guns in a frantic FPS experience.

Command your fleet aboard the bridge of your space station from a top-down perspective. Mine resources on nearby asteroids to produce a wealth of goods to sell to passing traders and grow your armies; Be careful: rival corporations and rebellious protestors will do all they can to thwart your aspirations of intergalactic domination!

As you can see in the trailer above, Executive Assault 2 is being readily updated while it goes through the Early Access process. The hybrid title allows players to flip between RTS and FPS gameplay, and has worked in “improved gameplay and balance changes, long range weaponry, better base defence, empty asteroids, even more random encounters”.

In addition to all of that, the game’s soundtrack is out as well, and available for your listening pleasure via Spotify, Amazon Music, and Apple Music.

Jason's been knee deep in videogames since he was but a lad. Cutting his teeth on the pixely glory that was the Atari 2600, he's been hack'n'slashing and shoot'em'uping ever since. Mainly an FPS and action guy, Jason enjoys the occasional well crafted title from every genre.
@jason_tas
Previous It’s another solid month for PS+ gamers, with Tony Hawk, Little Nightmares, and Yakuza
Next THQ (Nordic) and Yukes are back in the wrestling biz with AEW: Fight Forever