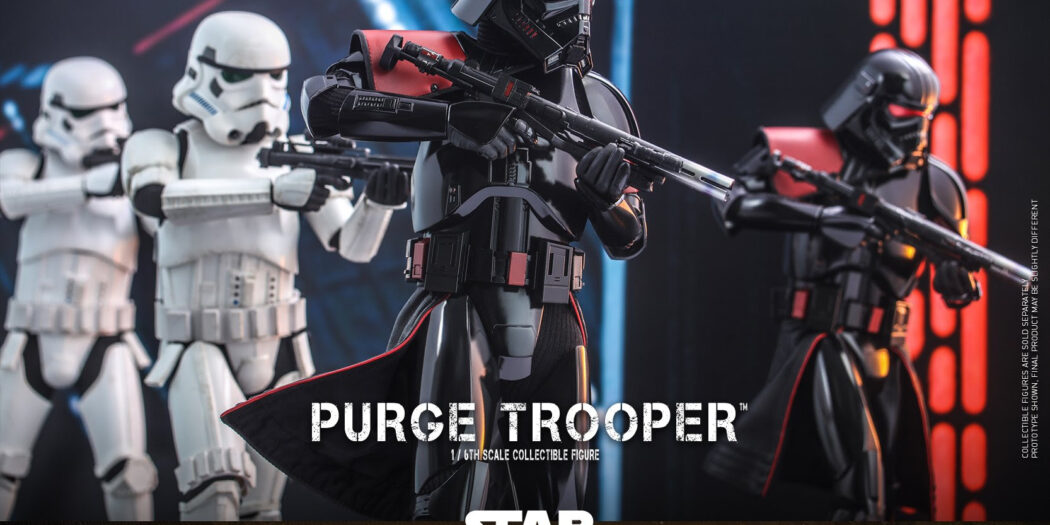 Purge Troopers are not that new to Star Wars fans, having been around for a few years, but their first live-action appearance has caught Hot Toys’ eye.

The Empire’s ‘Purge Troopers’ first appeared in a Star Wars comic book according to Wookiepedia, before moving into the video game space. That’s probably where most fans know of them, though they just made the live-action leap too, with the just-aired Star Wars: Obi-Wan series.

It’s that latest version of the now-established soldiers that we’ll be getting from Hot Toys, as a part of the company’s Star Wars lineup. And in a series that’s mainly more standard-looking Troopers (of varying kind), they’re a standout.

Purge Troopers are a highly specialized class of Imperial soldier, trained and equipped to assist the Inquisitors™ in hunting down Jedi™ and other Force-sensitive beings who threaten the Empire.

Borrowing tactics and methods first used by the Republic soldiers who accompanied Jedi generals during the Clone Wars™, this elite group is shrouded in secrecy.

The Purge Trooper 1/6 Scale Figure is meticulously crafted and outfitted with a highly detailed and screen accurate helmet, armor, and pauldron. Accessories include a selection of interchangeable swap-out hands for a variety of posing and display options, a blaster rifle, and more!

As you can see above, these guys are impressive. And of course, given that they’re coming from Hot Toys, they’re loaded with detail and accessories too. As things do go with the company though, they’re still a ways off.

The Purge Troopers aren’t set for release til summer 2023, so they’re still a year out. Although, given that they’re priced in at $235 USD, maybe that’s not a bad thing. Plenty of time to pay that order off after all.

Jason's been knee deep in videogames since he was but a lad. Cutting his teeth on the pixely glory that was the Atari 2600, he's been hack'n'slashing and shoot'em'uping ever since. Mainly an FPS and action guy, Jason enjoys the occasional well crafted title from every genre.
@jason_tas
Previous Diamond Select goes big with AEW, collectibles coming this year
Next Destroy All Humans! 2 bringing co-op multiplayer chaos