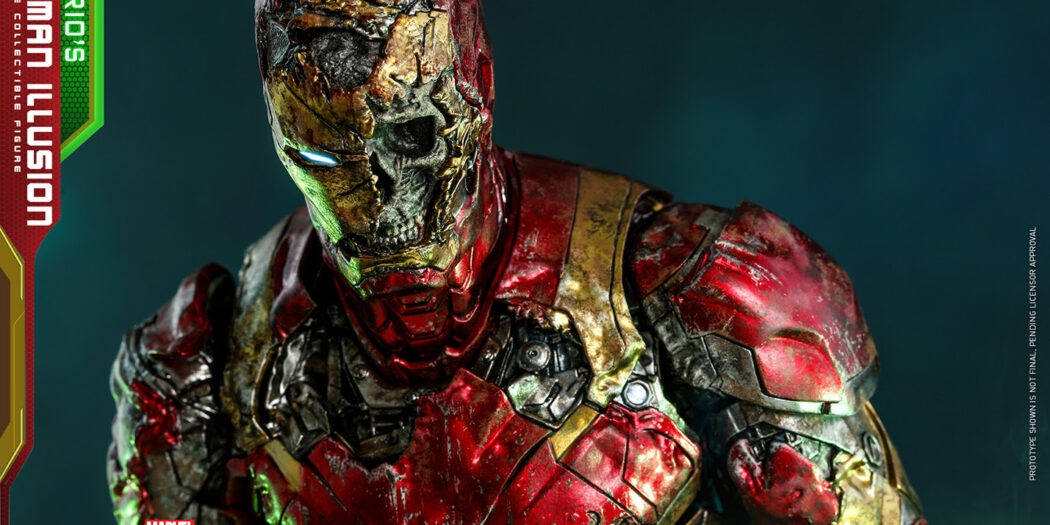 One of the most memorable parts of Spider-Man: Far From Home, the ‘resurrected’ Iron Man (thanks to Mysterio) is coming up from Hot Toys.

Zombies of all sorts have been popping up here and there in the MCU. There were the actual zombies in What If…?, then the possessed corpse of an alternate Doctor Strange in Multiverse of Madness, and of course the illusion of a rotting Iron Man in Spider-Man: Far From Home. Was that the first? Might’ve been.

But whether Mysterio’s hologram was or wasn’t the first ‘zombie’ in an MCU presentation, it’s one of the newest figures in Hot Toys’ lineup. The high-end collectible company has him inbound for shipping any day now, and he’s looking all kinds of cool.

Ripped right from the movie scene, Iron Man is featured with crumbling armor that displays rotting flesh and bone underneath. The base is almost as cool as the figure too, with green smoke rising out of a grave and a Mysterio drone flying above. And the whole thing is dotted with ‘pixelated’ effects. A very nice touch.

This ultra-detailed new 1/6 scale figure recreates the unsettling vision of Iron Man that Mysterio uses to terrorize Spider-Man in the movie. The Mysterio’s Iron Man Illusion 1/6 Scale Collectible Figure features heavily weathered and corroded metallic armor covered with scratches and rust. The armor includes a newly developed damaged helmet (with LED light-up function), as well as light-up LEDs on the hands and the arc reactor that add chilling drama and illuminate the exposed wiring beneath the suit.

The elaborate diorama display base inspired by the fight scene also includes an LED light-up function, as well as additional pixelated effects and a drone with green smoke effect.

Mysterio’s Iron Man Illusion is priced in at $420 USD, and is set to ship this month. But even with the launch happening any day, you can still pre-order. Check that out via Sideshow Toys, here.

Jason's been knee deep in videogames since he was but a lad. Cutting his teeth on the pixely glory that was the Atari 2600, he's been hack'n'slashing and shoot'em'uping ever since. Mainly an FPS and action guy, Jason enjoys the occasional well crafted title from every genre.
@jason_tas
Previous Factory Entertainment’s next Masters of the Universe replica shipping next month
Next Preview: Take an early look at the horror of Bloodborne: Lady of the Lanterns