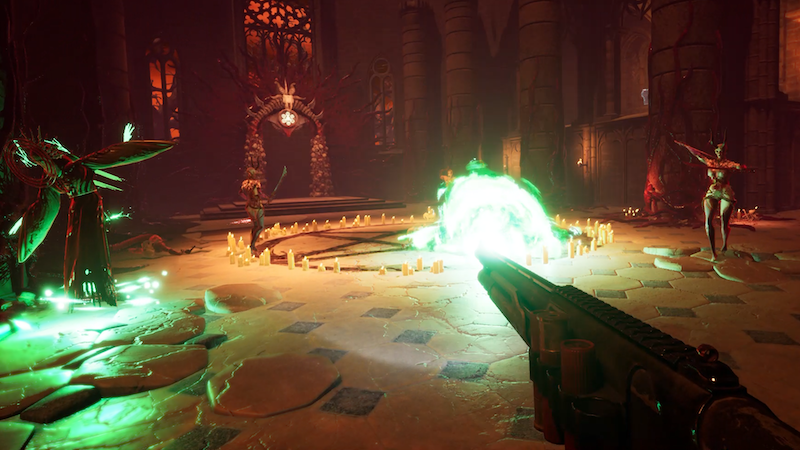 Home / demo / With an impressive pedigree, Bloodhound looks to slay some demons on PC and consoles

With an impressive pedigree, Bloodhound looks to slay some demons on PC and consoles

An indie FPS from the devs of Dying Light 2 and more, Bloodhound has a demo out now, and is heading towards full retail release.

A nose for demons

Arcade action and good old fashioned first-person shooter mechanics is the name of Bloodhound’s game. No, there’s no dog with an itchy trigger finger here, but there is one very pissed off Templar.

From independent Polish developer Kruger & Flint Productions, Bloodhound puts players in the boots of a member of a secret Templar order.

Bloodhound is a first-person shooter reminiscent of classic titles, focused on dynamic and uncompromising arcade action. In the main campaign mode, the player takes up the role of a member of a secret faction of the Templar Order and fights to stop the demonic cult of Astaroth.

“It is a game created out of passion – the kind we would like to play. It’s brutal, it’s intense and there’s blood. It’s all served in a heavy, horror reminiscent atmosphere. Our main inspirations were Doom, Quake and Painkiller, but we also reached the work of Zdzisław Beksiński, rich in decay centric pieces and apocalyptic motives” – said Rafał “Flint” Krzemiński, CEO, Kruger & Flint Productions.

All this and a Kickstarter too

A throwback in all but looks, Bloodhound is set to bring a total of 4 acts to players. Each of those will be packed up with 15 bad guy-types, plus 4 very angry boss-creeps. But don’t worry, because your Templar will be packing some serious firepower.

There’ll be a 10-gun-deep arsenal, complete with “machete, flamethrower attached chainsaw, shotgun, railgun, crossbow and missile launcher”. In addition to all that, the finished product will also sport multiplayer and “arena” modes.

While it certainly looks as though Bloodhound will be coming along this year anyway, there is a Kickstarter in place right now. According to the developer, this is to fund more work on the title.

If all shakes out right, it might be one to watch too. As mentioned, there are some seriously talented folks working on this one, who’ve worked at the likes of Techland, The Astronauts, QLOC, CI Games, Layopi Games, and Wastelands Interactive.

Bloodhound is set to arrive for both the PC and Xbox consoles this coming August. The PlayStation 4 and 5 will be getting in on the action as well, though not til 2023.

Want to get in on the action a little early? There’s a demo up right now on Steam.

Jason's been knee deep in videogames since he was but a lad. Cutting his teeth on the pixely glory that was the Atari 2600, he's been hack'n'slashing and shoot'em'uping ever since. Mainly an FPS and action guy, Jason enjoys the occasional well crafted title from every genre.
@jason_tas
Previous Trailer: The final season of Camp Cretaceous arrives this July
Next Trailer: Rainbow Six Siege gets first new map in years with Emerald Plains