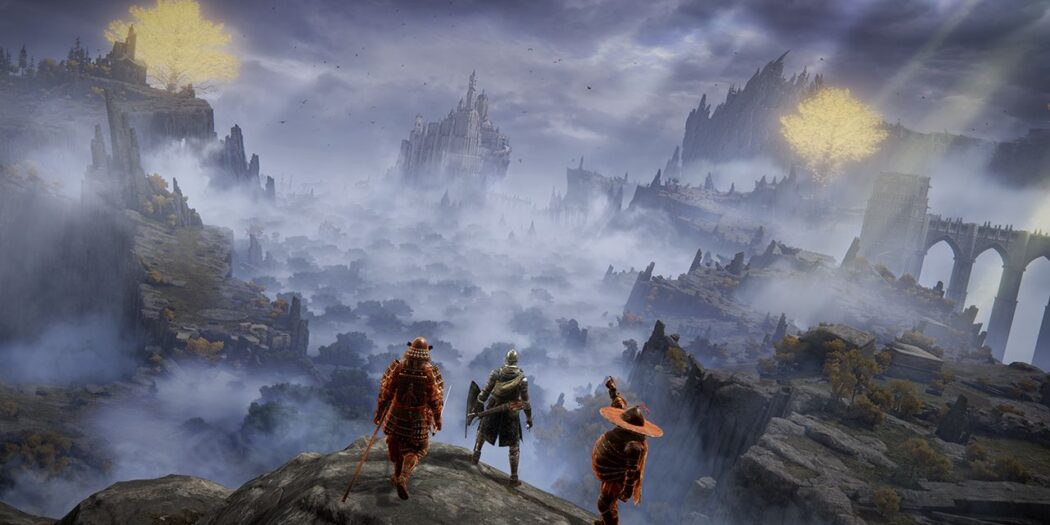 Home / Editorials / Even You Can Enjoy Eldin Ring

There’s an experience to be enjoyed even by novice players in Eldin Ring, with the right attitude and the right help!

It’s an immaculately crafted game, an open-world with the classic, brooding, Souls ambiance and grade-A world-building. The design of every vista, architectural triumph, and grotesque monster is stunning, a feast for the mind as much as the eyes.

Wrapping my head around the lore of every fort is the perfect capstone to every fuck up. What happened here? What’s happening here? Why am I caught in the middle of all of it? I’ve found dungeons that provide explanation only by way of the boss’s name. I’ve found treasures that open new rabbit holes (just where is this Grand Lift of Dectus?), and followed them down to their glorious payoff. Some provide answers. Always they leave more questions.

It’s an experience familiar to Souls players. Sleuthing out environmental clues and trickling text is what makes the Souls games so engaging, and it’s only compounded with the open-world nature of Eldin Ring.

In their way, the Souls games have long been open-world in the way their dizzying towers and dank nadirs miraculously weave together. But Eldin Ring’s wide landscapes and plentiful points of interest are much more akin to The Legend of Zelda: Breath of the Wild, and it’s one of the first games to truly learn from that title’s innovations (which, contrary to popular belief, go beyond the ability to climb every surface—something not included here).

It’s about discovery and environmental story-telling, it’s about being free to traverse a fascinating world at your own leisure and interest, and it’s about being rewarded with meaningful feedback every step of the way.

Yes, Eldin Ring can be a real devil, but any ready rage can be turned into eye-twitching annoyances with the right attitude (losing thousands of souls doesn’t really matter, because the real souls you earned was the knowledge you gained along the way). Or a co-op partner. If you’re stuck at a wall and it’s turning your relationship with Eldin Ring sour, give up on any preconceived notion that this is a mountain to be conquered on your own.

I once told you the best way to get into Monster Hunter was by playing with a friend.

If you’re one of those people who got swept up in the hype but can’t break through the first wall (or bridge) of Eldin Ring, then the answer is much the same: make yourself a Furlcalling Finger Remedy and get yourself a Souls-familiar friend.

Because full disclosure: I wouldn’t have made it 30 hours into this game without my brother. I’m a relative Souls novice (six hours of Demon’s Souls and six attempts at the Watchdog of the Old Lords in Bloodborne’s Chalice dungeon when my brother needed a break) who was fortunate enough to learn the most important lessons by watching my brother platinum every title in the series. Now I relish in finding bosses too difficult for me because each fight I fail is just another fun co-op challenge to enjoy together.

(If you really have to go it alone, ease your suffering by compartmentalizing Souls grinding and dungeon progression; When you find a new place, focus first on gathering items, learning the terrain, and finding your way. After that, you’ll be much more equipped to fight your way through and grind out some souls!)

Eldin Ring is so much more than its difficulty. If you love the world, the art, or the ambiance but can’t get through its challenge, there is a way forward. It’s an effort worth making, especially if it’s one we have to make together.

Tags Eldin Ring from software hands on PS5 Xbox One

Brutal Gamer's Nintendo Editor began his gaming life a little late- at five years old. But he's made up for it in the two decades since, gaming and writing about gaming with the same passion, fervor, and unrelenting love as his five-year old self.
Previous Trailer: Science-fantasy RPG ELEX II is out now
Next Nintendo Download: Frozen Floes and Fearsome Foes