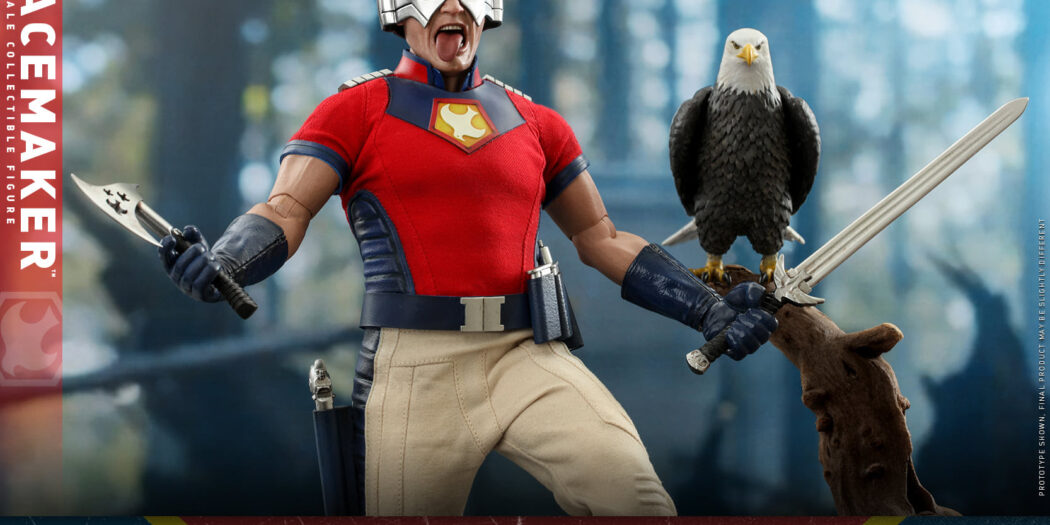 Collectible-maker Hot Toys is adding another one of DC Comics’ TV properties to its ever-growing lineup, with the upcoming Peacemaker.

You can’t see him

Or maybe you can actually, as actor John Cena’s Peacemaker has been something of a revelation for comic fans. The new Peacemaker HBO Max show picks up from the ending of the Suicide Squad film, and throws the slightly nutty Peacemaker into the employ of the A.R.G.U.S. agency.

The show has come to a close of course, but the Peacemaker merchandising is just kicking off. And if you’re looking to add the hero(?) to your collection, then you might want to take a look at what Hot Toys has on tap.

While this new figure looks pretty great, there are some odd choices at play. For starters, there’s no straight-faced portrait or non-helmeted head in the box. But you do get a tongue. Yes, a tongue. Peacemaker might be the first figure ever (other than Venom) to feature an optional tongue.

Also seemingly left out is a gun. While the character used a gun quite bit in both the film and the show, it looks like the Hot Toys figure leaves it out. Yes, I know there’s one in his leg holster in the images here, but it’s not listed as an accessory, so I assume it’s sculpted in.

Still, even with the drawbacks, Peacemaker looks like he also has the usual Hot Toys level of sculpt and detailing. If you’re looking to pick one up, then you’ll be happy to know that he’s up for pre-order (for $275 USD) and is set to ship in summer 2023.

Jason's been knee deep in videogames since he was but a lad. Cutting his teeth on the pixely glory that was the Atari 2600, he's been hack'n'slashing and shoot'em'uping ever since. Mainly an FPS and action guy, Jason enjoys the occasional well crafted title from every genre.
@jason_tas
Previous Yo Joe! Slew of G.I. Joe Classified pre-orders go live in a few minutes
Next Side-scroller 30XX gets a monster new update today