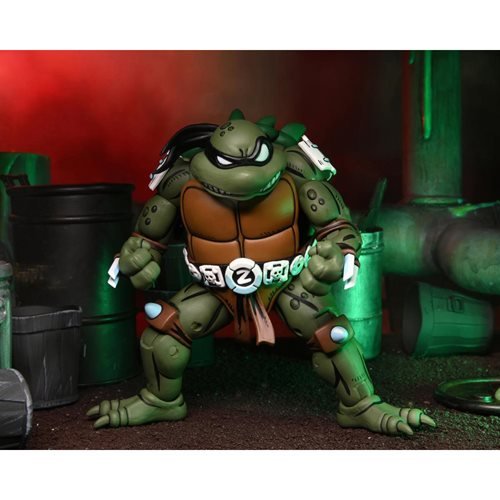 NECA is on a serious roll with its Teenage Mutant Ninja Turtles figures, unveiling new entries in ongoing series’ as well as revealing a new one.

Heroes in a half-shell

This past week was kind of a watershed for fans of the Teenage Mutant Ninja Turtles. Actually, this modern era might be a golden age for the green teens, with a multitude of lines out there to choose from.

Super7 has a throwback series with its Ultimates!, Playmates Toys is getting back into the game with its classic molds, and there are a number of third-party Turtles as well. Then you can add to that the NECA stuff.

A company that’s been at it longer than most at this point, NECA is absolutely rolling with TMNT movie and cartoon series lines. Though that slate of offerings is set to grow now, and by quite a bit.

Intro’d by the company was a TMNT Monsters line, the return of the Mirage comic series, and a shocker of an announcement with the debut of an Archie Comics lineup.

For those who don’t know, the Archie Comics series of TMNT tales ran for years, and was a universe unto itself. It was also one of my personal favorite renditions of the Turtles, introducing tons of fresh ideas and characters. NECA’s take will debut with some characters that have never before been seen in action figure form, starting with the fan-favorite Slash.

As you can see, Slash features the way more ‘action figure’ looking comics version of the villain. He’s also got some blades packed in, as well as some extra hands for posing.

Slash will lead the way for the new line, and land in stores this fall. Priced in at $34.99 USD, you can secure one for yourself via the Entertainment Earth link above.

As mentioned too, Mirage Comics is back. Another surprise for TMNT fans, the Mirage line will be presenting figures from the original TMNT adventures. New entries will include a Utrom soldier, the Fugitoid, and Renet, who will kick things off.

The Mistress of All Time will include the prerequisite extra hands, as well as a pile of accessories, including her staff.

Look for Renet to hit right around Slash, this fall. She’s also priced at $34.99 USD, and has a pre-order live right now (via EE) at the link above.

Both new and a callback to some of the original Playmates TMNT figures, the TMNT x Monsters series from NECA melds heroes with iconic film monsters. The first series includes the Hunchback, the Mummy, and Frankenstein’s Monster.

There was some bother about these, if you remember seeing that. Fans of the originals noted that the crosses don’t match up with the ones they remember. While I have to admit that would have been nice, these do look like pretty slick figures.

The first three are up for pre-order now, and are all priced in at $34.99 USD. Shaking things up a little too, these aren’t coming in the fall, but scheduled for April. So they’re right around the corner.

In addition to all of the above, there’s also what appears to be a one-off figure coming up from The Last Ronin. A ‘what if’ of sorts, The Last Ronin from publisher IDW takes the Turtles saga and closes it out with the last surviving brother out on a quest for revenge.

The story will result in at least one figure from NECA (and Playmates too), though more may or may not be coming.

The Last Ronin is tagged at $34.99 USD, and set to arrive in September.

That’s all for now, as go NECA and the TMNT license, but as we’ve seen there’s always more on the way. The company seems to be setting itself up as a go-to for all things TMNT, which is a wild thought, given that just a few years back any and all of what you see above would have been out of the question.

Jason's been knee deep in videogames since he was but a lad. Cutting his teeth on the pixely glory that was the Atari 2600, he's been hack'n'slashing and shoot'em'uping ever since. Mainly an FPS and action guy, Jason enjoys the occasional well crafted title from every genre.
@jason_tas
Previous Trailer: Tempest 4000 coming to both Switch and Atari’s VCS this spring
Next Trailer: Lo Wang returns next week, with the arrival of Shadow Warrior 3