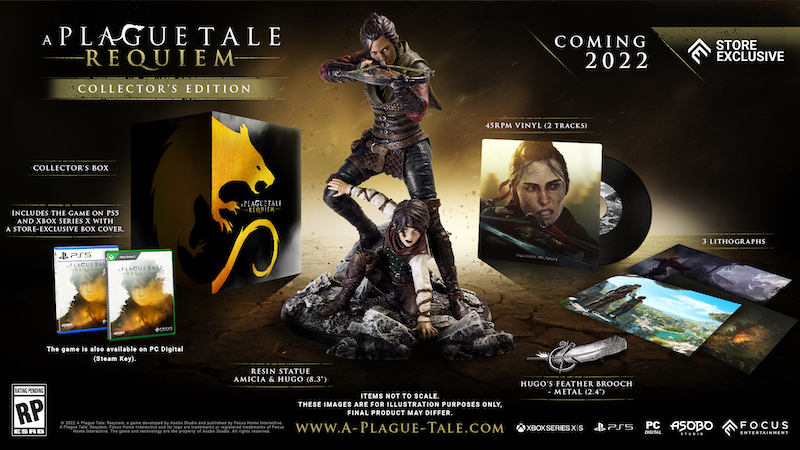 Home / News / A monstrous collector’s edition is coming up for A Plague Tale: Requiem

A monstrous collector’s edition is coming up for A Plague Tale: Requiem

A Plague Tale fans will have a gigantic new collector’s edition to pick up when the game launches, packed with physical goodies (and the game of course).

A Plague Tale’s first sequel was probably enough to get fans of that original game excited. A horror story set in the era of the plague (hence the name), A Plague Tale focused on heroes Amicia and Hugo.

Now the sister/brother pair are making their way back to consoles and the PC, in A Plague Tale: Requiem. The new title will follow them into new lands, and continue their dark-fantasy story. And apparently, it’ll be doing so in style.

Just announced by publisher Focus Home, A Plague Tale: Requiem will be on the receiving end of a pretty big-time collector’s edition. The box set will include not just a copy of the game, but also a statue, soundtrack (on vinyl!), and some other goodies.

The highlight of the Collector’s Edition is a gorgeous statue of Amicia and Hugo. Imagined and designed by the artistic team at Asobo Studio, this 21cm/8in tall resin statue painted in vibrant colors portrays Amicia and Hugo in action, wearing their main outfits from A Plague Tale: Requiem.

The Collector’s Edition comes with more: a bird feather metallic brooch, inspired by the bird feathers Hugo wears in the game, a 45 RPM vinyl of the game’s soundtrack composed by Olivier Derivière, 3 amazing A4 lithographsof exclusive artwork from the game, and, last but not least, the alternative cover for your game’s box exclusive to the Focus Entertainment Store!

A Plague Tale: Requiem’s Collector’s Edition is set for release on the Xbox Series X|S and PS5. Nintendo Switch and PC versions are also coming up, though they will be digital only. And as mentioned before, the Switch version will be a Cloud Version, so you’ll need a solid internet connection to steam it to your console.

Look for all versions of the game to be out some time this year.

Jason's been knee deep in videogames since he was but a lad. Cutting his teeth on the pixely glory that was the Atari 2600, he's been hack'n'slashing and shoot'em'uping ever since. Mainly an FPS and action guy, Jason enjoys the occasional well crafted title from every genre.
@jason_tas
Previous The god of thunder comes to Sideshow with new Thor statue
Next Trailer: Tempest 4000 coming to both Switch and Atari’s VCS this spring