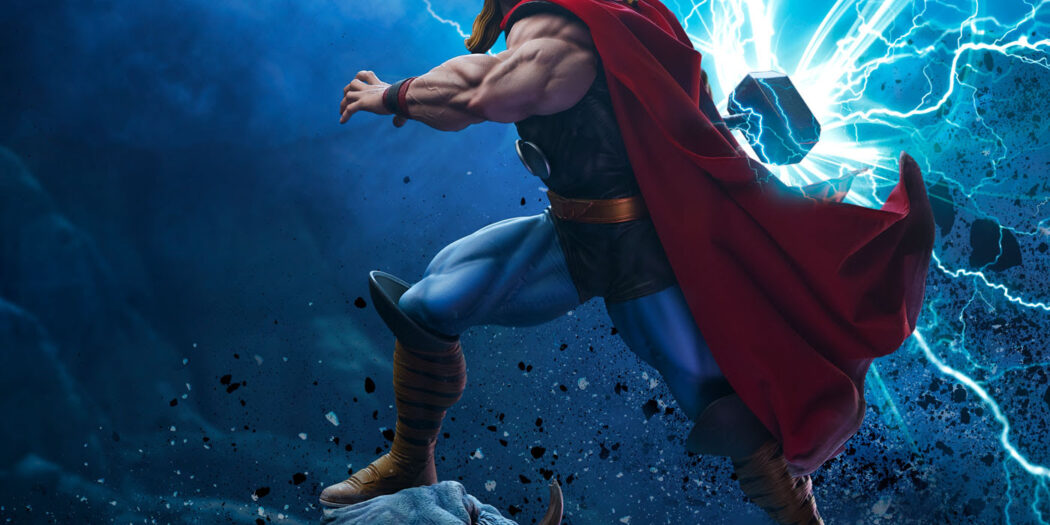 The god of thunder comes to Sideshow with new Thor statue

Based on the iconic visage of Thor from the Marvel comic books, This new statue is set to bring a little thunder and lighting to your bookshelf.

As Marvel Comics heroes go, Thor is a legend. Not only is the hero the actual Norse god of thunder, but he’s also done more feats of daring do in the Marvel universe than you can shake a Frost Giant at.

Speaking of, both Thor and a gigantic Jotunheim-ian figure into the newest piece from Sideshow. The new Thor Premium Format Figure looms large, and poses the thunder-god over the prone form of a Giant.

The piece is a massive 22″ tall, and over a foot wide, so it should make quite the impression in your Marvel collection. And maybe one of the coolest parts too, is that the cape is wired. So you can add a little customization to the pose.

Thor is set to ship out in the 4th quarter of this year. He’s priced at $635 USD, and up for pre-order now.

Verily, the Thor Premium Format™ Figure stands an impressive 22” tall and 19” wide, and depicts the son of Odin standing victorious atop a felled Frost Giant foe. The icy expanse of Jotunheim is no match for an Asgardian, and Thor swings his mystical mallet Mjolnir in anticipation of yet another glorious battle. The hammer is etched with its iconic enchantment, proving the prince worthy of its incredible power.

Jason's been knee deep in videogames since he was but a lad. Cutting his teeth on the pixely glory that was the Atari 2600, he's been hack'n'slashing and shoot'em'uping ever since. Mainly an FPS and action guy, Jason enjoys the occasional well crafted title from every genre.
@jason_tas
Previous Fallout 76 rolls on with plenty of new content in 2022
Next A monstrous collector’s edition is coming up for A Plague Tale: Requiem