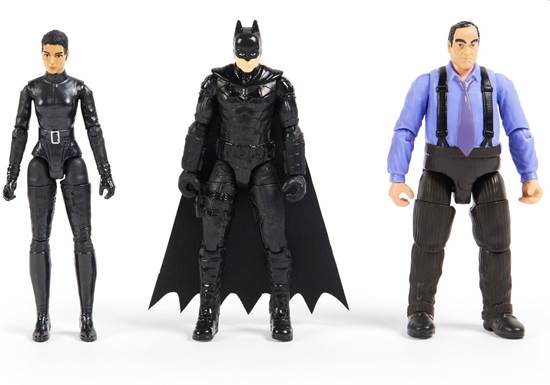 Home / Action Figures and Toys / The Batman arrives this spring, with the new collection from Spin Master

The Batman arrives this spring, with the new collection from Spin Master

With The Batman making its way to theaters, kicking off a new Bat-movie universe, toy-maker Spin Master will have an array of figures out to tie-in.

The Batman looks like it might be the darkest version of the Dark Knight to hit the big screen yet. But that doesn’t mean that action figures aren’t in the cards for it. Actually, it means just the opposite probably, with a few different lines coming up.

One of those will be from Spin Master, who’ve got the market cornered when it comes to 3.75″ DC Comics figures and vehicles. As it turns out, you can expect both to spin (ahem) out of The Batman, with heroes, villains, and the Bat-muscle-mobile all making an appearance.

The line will debut this spring, shortly after the film hits theaters in March. Scroll down for the full look at what’s coming up.

The movie look-a-like Batmobile comes loaded with features including LED engine lights, headlights, and an undercarriage residual glow that truly makes it come to life! Level up your missions with life-like engine sounds. It even includes a 4-inch Batman figure!

Wheelie into action with this movie themed Batmobile. Activate the wheelie with just the push of a button and watch this high-performance RC hit turbo speeds. The custom controller is even designed after the Batman symbol Watch as the rear engine flame lights up as you accelerate into Gotham City!

Continue fighting crime in Gotham City with this 12-inch Batman Feature Figure with expanding wings! Just press the belt buckle to open the wings, and you’re ready to start your mission. This all-black suit also has a light up feature and awesome sound effects that activate when you press the Bat-symbol on his chest!

Recreate epic crime fighting scenes with Wingsuit Batman, Selena Kyle, and Penguin, based on the upcoming Batman movie! Each figure features 11 points of articulation and comes with three accessories and an Evidence Collector Card.

Each 12-inch action figure features 11 points of articulation and a detailed sculpt with true to film movie styling. Engage your imagination and pose Batman and Selena Kyle as you play out your own Batman storylines!

Jason's been knee deep in videogames since he was but a lad. Cutting his teeth on the pixely glory that was the Atari 2600, he's been hack'n'slashing and shoot'em'uping ever since. Mainly an FPS and action guy, Jason enjoys the occasional well crafted title from every genre.
@jason_tas
Previous This month’s Xbox Games with Gold include Radiant Silvergun, Space Invaders
Next PS+ adds Deep Rock Galactic, Persona 5, and Dirt 5