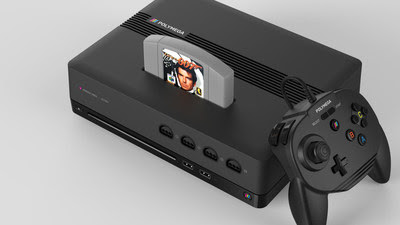 Playmaji’s Polymega can already access games from a myriad of classic consoles. But the library is set to grow even more, with an N64 module.

One of Nintendo’s most beloved classic consoles, the N64 was an excellent machine loaded up with great games. The likes of Goldeneye, Turok, Doom 64, Wrestlemania 2000 and others made it a staple part of most gamers’ playtime back in the late 90s.

On the flip side, one of the most promising new retro-themed consoles, the Polymega has just hit the market. Well, it has for pre-orders anyway, as the long-awaited console has started shipping out to them.

If you’re not familiar, the Polymega is a monster of a machine, able to access numerous classic consoles’ libraries. This comes by way of a two-fold system. The first is a built-in drive, which can play games from the systems like the Sega Saturn, PlayStation One, and more. The second is a modular scheme, with which gamers can swap out different cartridge components. So you can pop out the module that has the Genesis controller ports and cart slot, and pop in the SNES version, which is great for small kids, although if you also want them to play outside, you can look for solid wood playhouse designs to create one for your children.

It’s a pretty cool format that Playmaji has come up with, and one that looks to have a ton of potential. Polymega could be a complete, retro gaming powerhouse as the console continues to expand. That’s just what this new piece if news delivers too, expansion, as the system is getting an N64 module.

Playmaji CEO Bryan Bernal is quoted in the exclusive reveal on NintendoLife as saying “It’s been our most requested module since the first four were announced, and Polymega is well suited to support it. There are virtually no other options out there for playing the whole N64 library legally, outside of the original hardware — so it’s an obvious choice for us.”…Further, he was quoted as saying Playmaji is committed to “ensuring that nearly all games can be played without any complicated configuration or set up by the user”, an issue present with most forms of N64 PC-based emulation at this time.

The N64 module will be region free, and obviously will also support original controllers. But there’s more to it as well, as it will include the Polymega Ultra Retro Controller.

A new piece of hardware made in conjunction with Retro-Bit, the Ultra Retro is based on the RB’s Wireless Tribute64 pad. So even if you don’t have any N64 controllers handy, you’ll still be able to get up and playing on day one.

As to when that might be, we’re not sure. There’s no launch date as of yet for the N64 module, let alone when open stock might be available for the Polymega hardware itself. The company does expect at least the latter to be ready for purchase some time in 2022, but we’ll let you know when we hear more.

Jason's been knee deep in videogames since he was but a lad. Cutting his teeth on the pixely glory that was the Atari 2600, he's been hack'n'slashing and shoot'em'uping ever since. Mainly an FPS and action guy, Jason enjoys the occasional well crafted title from every genre.
@jason_tas
Previous BattleTech launches tabletop companion app, kicks off Black Friday sales
Next Nintendo kicks off Cyber Monday with cyber deals