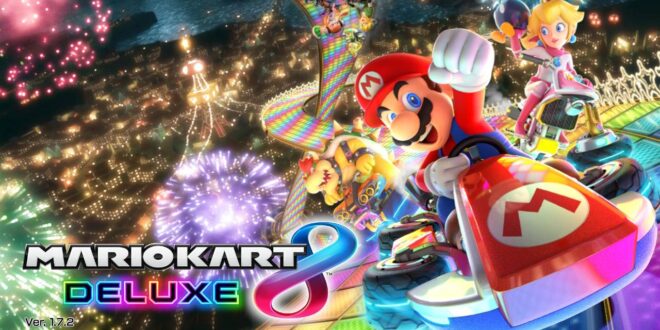 Editor’s Note: I haven’t played the original Mario Kart 8 that was released on the Wii U in 2014 so I will be unable to compare that version with the Nintendo Switch release. Also due to the pandemic, I wasn’t able to test out the rest of the gameplay modes. Thank you for understanding.

Start your kart engines as race season has arrived. With 48 beautiful courses and a huge colorful cast of characters to choose from Mario Kart 8 Deluxe is sure to put a smile on your face!

Just like having hot chocolate on a cold winter day, Mario Kart 8 Deluxe is the most comforting game I’ve played throughout this pandemic as it makes me smile, provides emotional support and improves my well-being. You know how we have comfort foods? Well, I have comfort video games that I go to when I need a pick-me-up and to help process difficult emotions and moods. I’m happy to say Mario Kart 8 Deluxe has made the list!

Feel The Wind In Your Hair!

Racing games aren’t my strong suit: I’m always bumping into things or have trouble staying on course by going in the wrong direction if another car bumps into me on purpose and I try to bounce back (haha) but Mario Kart 8 Deluxe has made the genre accessible for players like me who want to give racing games another shot without the endless frustration and tears and is a great entry point for new players —which I’ll talk more about a little later. Let’s set the stage first!

Since racing environments take place outside I opened my bedroom window to let the fresh air in. This would help me become more immersed in Mario Kart 8 Deluxe and once I felt the first breeze pass through my hair I was ready to choose my character, customize my control settings, and finally start my kart engine!

Accessibility Is A Great Way To Customize Your Play Style

As I mentioned, Mario Kart 8 Deluxe is a great entry for players of all skill levels, and don’t be ashamed of embracing the play style that is right for you. Because the racing genre has been so unkind to me in the past I wanted to use everything that Mario Kart 8 Deluxe had to offer:

I’ve heard that auto acceleration and smart steering are options aimed at kids but I want to assure you that unless you’re in an official Mario Kart 8 Deluxe tournament it’s okay to use these features. The whole point of video games is to ENJOY them. I used auto acceleration, smart steering, and later on the tilt controls. I’ll even go as far as to say that since Mario Kart 8 Deluxe had these features it helped me get to know my Nintendo Switch better and appreciate what an amazing piece of gaming technology it is!

You can set up these options by pressing the + sign after choosing your character or if you pause the game. With the exception of the steering wheel accessory, I used the first three control options and they are and continue to be a LIFESAVER!

While there are so many characters to choose from I loved playing as my devil child Bowser Jr. as he always sounded so mischievous I mean who wouldn’t like him? Sometimes it’s good to be bad anyway! I honestly thought that Princess Peach would always be my main character but I was wrong… Oh so very wrong— Bowser Jr. has the number one spot! (For the purposes of this review I did play as Toadette too.)

There are various play modes available to you and which include:

When I had a Nintendo Switch Online Membership I tried out Online Play and it was really fun facing off against other players from all over the world. For Single Player, I customized my race stages to be randomly selected since it kept the element of surprise and the game fresh. I never know what I’m going to get each time I play!

Before you start your race you can customize your kart however you like. In my first playthrough of Mario Kart 8 Deluxe I was so eager to just start racing I didn’t realize the kind of kart, wheels, and a glider that you pick can influence your overall speed, acceleration, weight, and handling. I tried to make sure that almost every section was as balanced as it could be but as I raced all I could think about was how smooth as butter the controls were. It felt comfortable that I didn’t pay attention to the extra settings going forward. I just picked my character, kart, wheels, glider, and off I went! Maybe this will matter more to you, but for me, it felt just right.

My favorite course is Twisted Mansion. I just love how spooky it is and it was ideal to race on that track during Halloween.

Mario Kart 8 Deluxe has made the time fly by quickly and I appreciate that. Sometimes you need the distraction to feel better.

Oops! I Slipped On A Banana Peel

One of the fun parts of Mario Kart 8 Deluxe is that you can interfere with your opponents on the course by pressing the ZL button to use items to get them out of your way and steal their place in the race. I’m still discovering every item that you can get so I can’t comment on every one of them but I can share what my favorites were as well as my least favorites. I loved the red Koopa shell. This item has a high rate of hitting the opponent near you stopping them dead in their tracks, while the traditional mushrooms speed you up.

My least favorite items (especially when they were used against me) were the green Koopa shell as it didn’t always hit your target. It was useful for clearing obstacles in your path though. The blue Koopa shell was a nightmare— it would circle your head and then explode into electricity leaving your character stunned for a few seconds. I found this item was used often if I was in first place and then I’d get my place stolen once I was ensnared and hit by the blue shell of doom. The banana peel is a tricky one. On one hand, if used correctly you can cause your opponent’s kart to slip. On the other hand, if used incorrectly, you can be the one to slip on your own banana peel putting yourself at a disadvantage.

You can hold up to two items at once as well.

This is my first rodeo with Mario Kart 8 Deluxe and the visuals are gorgeous. I spent a few minutes just taking the beauty all in. In all my years of playing video games, I have never seen anything this pretty. It drew me in and I couldn’t put down the game once I started playing it and I haven’t put it down since. Whether it’d be for an hour racing session or a full-on tournament against the computer, Mario Kart 8 Deluxe is a game that I have and will always go back to as it’s just that good.

One thing that is cool to mention is that during your final lap around the race track the music speeds up as it indicates: “This is it! The winner takes it all!” And if I am being honest, the sped-up version of the music sounds better.

I also wish that the Grand Prix was a bit longer. I was surprised by how quickly I finished it.

Mario Kart 8 Deluxe is a wonderful addition to the Nintendo Switch library. It has that special magic sauce that will keep you coming back for years to come.

Mario Kart 8 Deluxe has done wonders in bringing people together, and still continues to be one of the most popular games sold!

Hey! I'm Nadia! I am a big fan of RPGs and you can almost always catch me playing one in my spare time. Writing is my passion, and my intention is that you all learn something through my work!
Previous Unbox EXO-6’s latest Star Trek figure, Captain Katheryn Janeway
Next The Elder Scrolls 6 will be an Xbox console exclusive