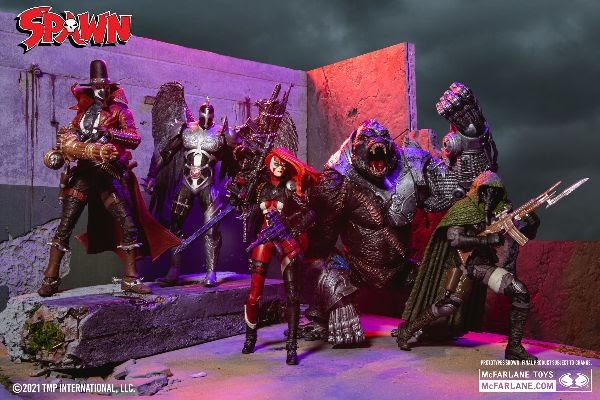 There’s a new wave of Spawn figures ready for pre-order from McFarlane. And if you missed the Target exclusive Gunslinger, you’re gonna be happy.

Rolling onward is McFarlane Toys’ Spawn action figure rebirth. Wave 1 hit not all that long ago, and now wave 2 is ready for action. Or it’s ready for pre-ordering at least.

As mentioned above too, if you missed out on Target’s exclusive Gunslinger Spawn earlier this year, this is your wave. A variant of the Gunslinger is a part of it, along with the Dark Redeemer and Soul Crusher.

The three are ready for ordering now, and should ship out around November. So… next month then. Time flies. You can find them at most online toy retailers, including McFarlane’s own shop.

What hasn’t been talked about yet though, are the other two figures you see here.

Those would be She Spawn and an incredible looking Cy-Gor. Yes, the big cybernetic ape is a part of McFarlane’s RAW10 line, but he’s making a big splash in Spawns series too. It’s kind of hard to tell how big he is in the pic, but he’s obviously a Mega Figure, so he should take up a decent amount of shelf space.

Hopefully there’s info on them sooner than later. And hopefully there’s a basic Spawn figure on the horizon somewhere too. True he was in the Kickstarter campaign for the line, but there were a lot of fans who missed out on that (cough), so the sooner the better in my opinion.

Jason's been knee deep in videogames since he was but a lad. Cutting his teeth on the pixely glory that was the Atari 2600, he's been hack'n'slashing and shoot'em'uping ever since. Mainly an FPS and action guy, Jason enjoys the occasional well crafted title from every genre.
@jason_tas
Previous Trailer: King Arthur dated, arrives in February
Next The BloodRayne series revamp to hit consoles on November 18th