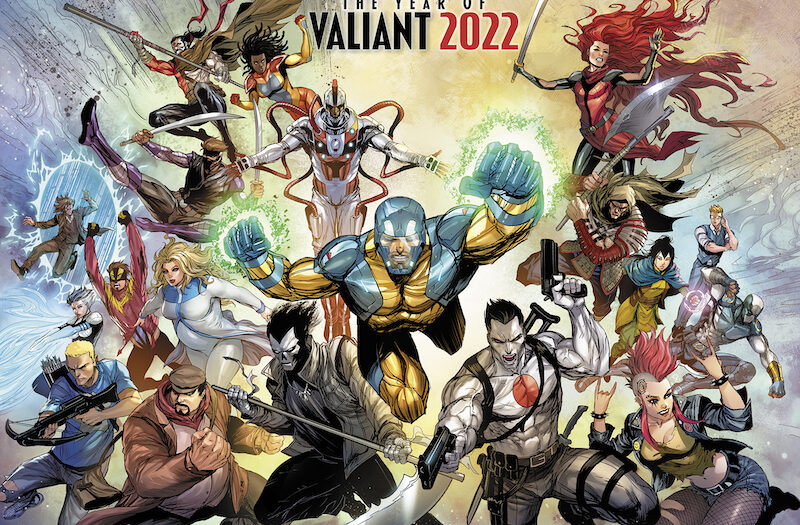 Home / Comics / With big returns as well as debuts planned, 2022 will be the Year of Valiant

Valiant Comics has been rolling along, though a little on the quiet side as of late. That comes to an end in 2022, with a celebration dubbed the Year of Valiant.

To be fair, it’s been a weird couple of years for everyone. The pandemic put lots of things on ice, as most of the globe had more pressing matters to attend to. But we’ve slowly been getting back to normal now, and as such Valiant Comics is set to make a splash once again.

The publisher has announced that next year will be the Year of Valiant, with a number of things planned. For one thing, they’ll be reintroducing some oddly absent heroes (and presumably villains. But of course, it will also mean some debuts, and there’ll be a pretty big arc too, that’s been cooking.

That would be the Deadside War, which will begin in Shadowman #5, from Cullen Bunn and artist Pedro Andreo. It’s a book that’ll start things rolling in ’22, with the reappearance of Punk Mambo, and “other familiar faces from the Valiant Universe”.

“In the new ‘Deadside War’ story in SHADOWMAN, we’re seeing Blights—tears in the fabric of reality between our world and the Deadside — opening with increased frequency and increased supernatural mayhem,” teased Cullen. “Shadowman is tasked with protecting our world, but he’s no longer sure that throwing punches and swinging scythes is the way to combat the Deadside’s ultimate plans. Plans? How can a place have plans? The answer to that question will lead Shadowman to gather allies such as Punk Mambo to his side. It will also awaken some old adversaries who might be too much even for the combined might of our heroes. All this brings us to the titular war, which could rip the entirety of the Valiant Universe apart.”

Of course that’s far from all that 2022 will bring. It wouldn’t be much of a “year of” if it didn’t. What’s to come though, isn’t quite ready to be talked about just yet. But look for it in short order, as Valiant Comics has much more up its sleeve.

Jason's been knee deep in videogames since he was but a lad. Cutting his teeth on the pixely glory that was the Atari 2600, he's been hack'n'slashing and shoot'em'uping ever since. Mainly an FPS and action guy, Jason enjoys the occasional well crafted title from every genre.
@jason_tas
Previous Trailer: Dying Light backflips over a zombie and onto the Switch today
Next Artist Jim Cheung lends his hand to new Marvel sketch cover series