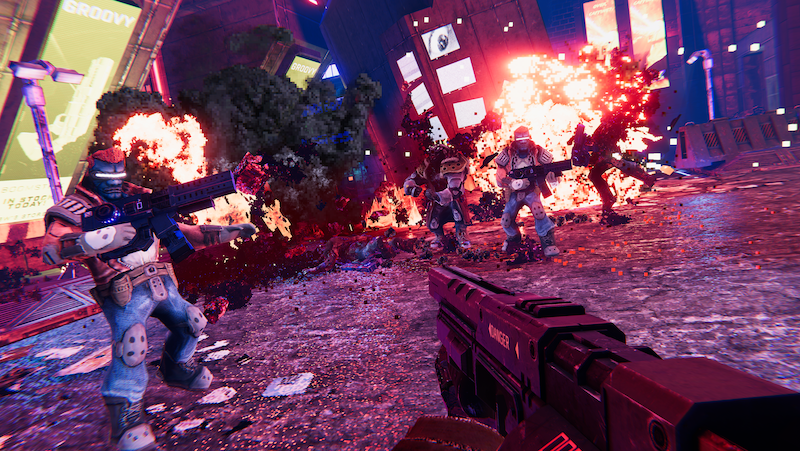 How about a bit of the old untraviolence? Make it ridiculously fast too and you have Apogee’s upcoming first-person shooter, Turbo Overkill.

Just revealed last week, Turbo Overkill is a title that you just have to kind of see in action to believe. Legendary gaming house Apogee’s latest, Turbo Overkill has a retro theme, and combines a Blade Runner-esque aesthetic with lightning fast FPS action.

It’s also got a bounty hunting hero by the name of Johnny Turbo, who has a transforming chainsaw leg. Yeah. Now imagine flying through the air wasting your enemies, and then landing on one of them while using said leg in the most over-the-top way possible. That’s Turbo Overkill.

Turbo Overkill takes over-the-top to never-before-reached heights. Activate Hero Time(™), a new form of slow motion with a twist. Build incredible speed by wall-running and dashing. Slide on your chainsaw leg, eviscerating foes and opening up bosses for critical damage, and go car-surfing—yes, riding on the hoods of flying cars. Blast away with the Twin Magnums, which lock-on and instagib several foes, the Boomer Shotgun and its attached grenade launcher, or the Telefragger sniper rifle, which teleports Johnny inside an enemy before they explode from within. The FPS genre is about to get really wild and really fun again.

Apogee promises 24 stages in Turbo Overkill, complete with “secrets, bonus arena stages, and white-knuckle combat puzzles”. Look for it in 2022, for the PC, Xbox One, Xbox Series X|S, PS4, PS5, and Switch.

Jason's been knee deep in videogames since he was but a lad. Cutting his teeth on the pixely glory that was the Atari 2600, he's been hack'n'slashing and shoot'em'uping ever since. Mainly an FPS and action guy, Jason enjoys the occasional well crafted title from every genre.
@jason_tas
Previous Trailer: Big Rumble Boxing out now on consoles and PC
Next Trailer: Tennis Manager 2021 hits full retail tomorrow