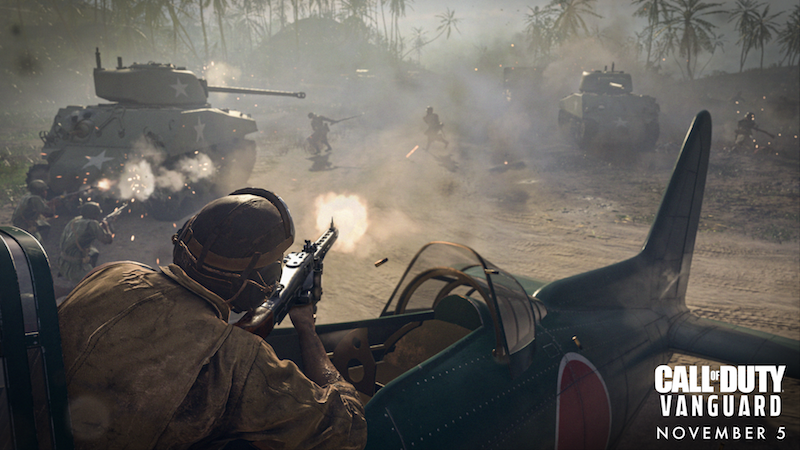 Getting an official reveal yesterday, Call of Duty’s next installment is Vanguard. The game promises a massive, interconnected experience.

A fresh Call of Duty reveal 2 and a half months before launch? Sure, why not, these last few years have thrown everything off anyway. And in the case of Vanguard, it’s looking like a nice surprise… not that it’s a surprise.

Anyway, Activision is promising an “interconnected” adventure with Vanguard, bringing together the free-to-play Warzone, and the campaign. And it all focuses on the very first Special Forces team.

Vanguard delivers the complete package to Call of Duty fans across Campaign, online Multiplayer and Zombies co-operative modes. Players will witness the origins of Special Forces as they change the face of history, forming Task Force One in a sprawling World War II narrative campaign spanning the Eastern and Western fronts of Europe, the Pacific, and North Africa.  Multiplayer features 20 maps on day one at launch. While Zombies fans will experience a signature undead gameplay experience, marking a franchise-first Zombies crossover for Call of Duty.

As you can see, there’s much more than usual happening in Vanguard. And I’m not even referring to the gorgeous graphics, courtesy of that same engine that you saw in Modern Warfare.

The publisher is calling this “the most connected Call of Duty ever”, and they’re backing that statement up with both Warzone… and zombies.

“Call of Duty: Vanguard is primed to deliver a stunning range of gameplay experiences for the entire Call of Duty community. Vanguard’s breadth of content is a hallmark of the title, with more multiplayer maps on day one than ever before and the first Zombies crossover in Call of Duty history,” said Johanna Faries, General Manager, Call of Duty, Activision. “Warzone fans will also experience a host of exciting new things to come as part of the new launch. We can’t wait to share more soon.”

Ready to wage the second great war from some new perspectives? Call of Duty: Vanguard is set to arrive on November 5th, 2021. Look for it on the PS4, PS5, Xbox One, Xbox Series X|S, and PC (via Battle.net).

Jason's been knee deep in videogames since he was but a lad. Cutting his teeth on the pixely glory that was the Atari 2600, he's been hack'n'slashing and shoot'em'uping ever since. Mainly an FPS and action guy, Jason enjoys the occasional well crafted title from every genre.
@jason_tas
Previous Trailer: WRC 10 to bring series first, car customization
Next Trailer: Landing this week NACON’s RiMS Racing brings motorcycle races to consoles and PC