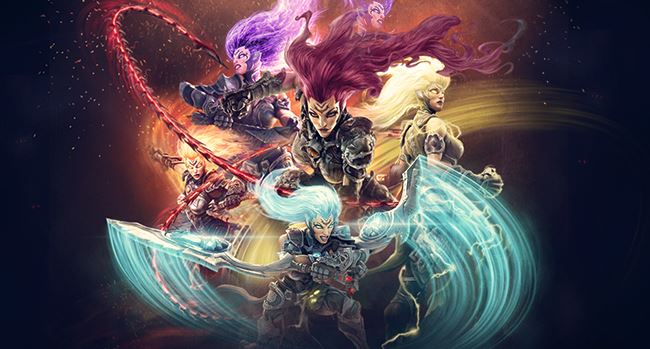 Home / News / Darksiders III on the way to Switch next month

Darksiders III on the way to Switch next month

The apocalypse is in your hands in September. THQ Nordic’s Darksiders series completes its saga on Switch next month, with Darksiders III.

Originally released in 2018, Darksiders III debuted the third of the eventual four horsemen of the apocalypse. Fury was the star, and like all the other horsemen, she presented a unique play experience. That’s because Fury is a mage, and has an evolving set of weapons and powers, as the game’s campaign rolls on. She’s also pretty wicked looking, with her hair presenting an impressive array of colors.

Here’s the trailer from the original launch:

And the pr text about the new port:

Players return to an apocalyptic planet Earth in Darksiders III, a hack-n-slash action-adventure where players take on the role of FURY in her quest to hunt down and dispose of the Seven Deadly Sins. The Charred Council calls upon FURY to battle from the heights of heaven down through the depths of hell in a quest to restore the balance between good and evil and prove that she is the fiercest of the FOUR HORSEMEN. FURY is a mage, her form evolving throughout gameplay and with it, her powers and weaponry. The expansive Darksiders III game world is presented as an open-ended, living, free-form planet Earth, dilapidated by war and decay, and overrun by nature. FURY will traverse back and forth between environments, battling other-worldly creatures and unlocking puzzles while advancing the Darksiders story.

Darksiders III makes the leap to the Switch on September 30th, 2021. It’ll be available both physically and digitally on the eShop, priced in at $39.99 USD either way.

Jason's been knee deep in videogames since he was but a lad. Cutting his teeth on the pixely glory that was the Atari 2600, he's been hack'n'slashing and shoot'em'uping ever since. Mainly an FPS and action guy, Jason enjoys the occasional well crafted title from every genre.
@jason_tas
Previous Trailer: Skater XL’s multiplayer free skate arrives
Next Trailer: Arietta of Spirits brings Zelda-like action to consoles and PC this month