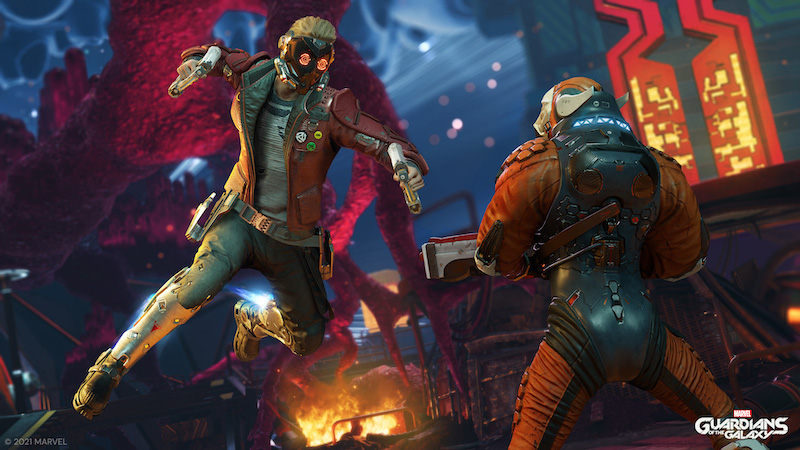 Home / E3 / E3 2021: Square Enix reveals their next Marvel title with Guardians of the Galaxy

Square Enix is taking their Marvel license to the stars, with a Guardians of the Galaxy title that looks like a cross between the movies and comics.

Okay, so Square Enix’ Avengers game didn’t get the best initial reception. That’s not to say that it hasn’t gotten better though, since the title has added quite a bit and has even gotten the next/current-gen bump. The bottom line is that it’s been fairly improved since launch. And the publisher is riding that wave, if you want to call it that, straight into a Guardians of the Galaxy game.

Guardians of the Galaxy will feature Peter “Star-Lord” Quill in the main character position, with the (commandable) Guardians at his side. So you won’t be able to play as Drax or Gamora, but they’ll be there to assist you as you jet and blast your way through the third-person action game’s campaign.

Speaking of, it’s a campaign that looks like it’ll hold quite a bit of Marvel Comics’ cosmic corner. Check out the trailer below.

Fire up Star-Lord’s jet boots for a wild ride across the cosmos in this fresh take on Marvel’s Guardians of the Galaxy. With the unpredictable Guardians at your side, blast your way from one explosive situation to another, with both original and well-known Marvel characters caught in a struggle for the fate of the universe. You got this. Probably.

Ready to experience the cosmic Marvel U? Guardians of the Galaxy will be hitting the PS4, PS5, Xbox One, Xbox Series X|S, and PC this October the 26th. Pre-orders are open now for both the standard and Deluxe editions.

Jason's been knee deep in videogames since he was but a lad. Cutting his teeth on the pixely glory that was the Atari 2600, he's been hack'n'slashing and shoot'em'uping ever since. Mainly an FPS and action guy, Jason enjoys the occasional well crafted title from every genre.
@jason_tas
Previous Trailer: Start your blocky metropolis as Urbek City Builder’s demo goes live
Next E3 2021: TPS Strange Brigade is out right now on Switch