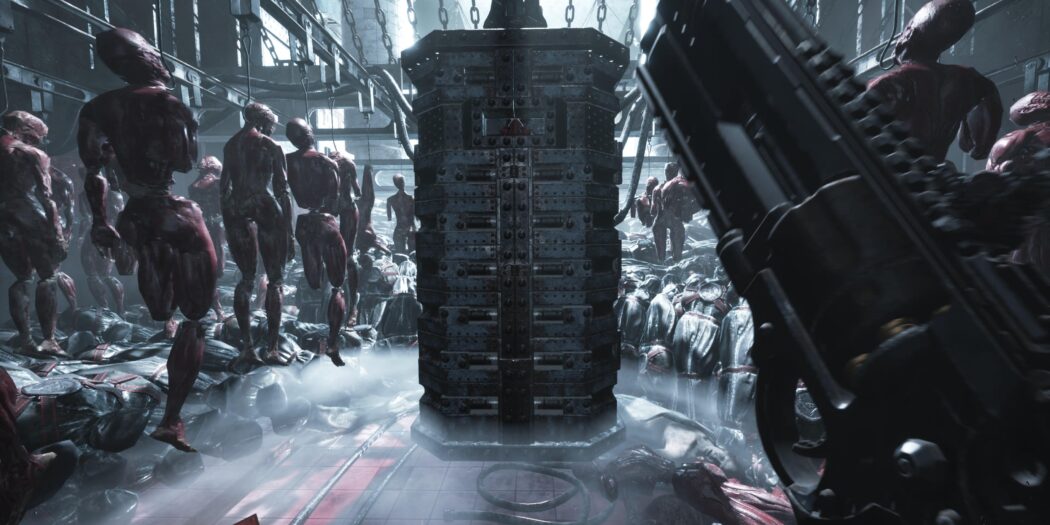 Necromunda: Hired Gun is more than just a case of the NecroMondays.

Necromunda: Hired Gun is a short, mostly sweet collection of campaign missions, repeatable side endeavors, and guns. Lots of guns, with plenty of fun-to-use abilities to back them up.

You’re a Hired Gun, so once you’ve selected your portrait (which affects your in-game model and character voice), you’re on your way to do mercenary work for the fine folks of Martyr’s End and the ever-present Jericho.

I should mention I know absolutely nothing about the Warhammer universe, so if I should be familiar with the person or place, I’m not, but what’s going on here in Necromunda: Hired Gun is simple enough to grasp: gangs are at war, and the player chasing the Silver Talon disrupts the order of things.

There are thirteen main story chapters and a smattering of side missions that you can grind out for credits. The currency goes a long way to keeping you equipped with better guns and new abilities, so taking the time to dabble or grind goes a long way. All of these are accessible through Martyr’s End, a central hub where you’ll return after every mission to spend your money and take a breath.

The story has a couple of fun moments that make use of the setting and bring you to interesting and changing locations, but the character’s (and my own) emotional investment ends there. It’s serviceable, but by no means the main draw of the title.

In the about eleven hours it took for me to complete the campaign, I had repeated enough side missions to fully upgrade my character and mastiff.

Did I not mention the mastiff? You have a cyborg mastiff along for the ride. During any mission, you can summon her at the press of a button and she’ll sniff out your enemies (highlighting them in the environment, even through walls) and lunge at their throats. After her time (or health) runs out, you’ll have to wait a bit to bring her back and distract more foes.

The mastiff is only one of the abilities that elevates the combat of Necromunda: Hired Gun and makes the First Person Shooter (FPS) more than just a quick distraction.

Necromunda: Hired Gun is a first-person shooter with basic guns and excellent abilities. Knock enemies off balance with a shockwave, shoot out homing fireballs, or illuminate enemies and collectables against the background. You don’t have to pick and choose here, either: abilities are accessed via a shoulder button, meaning you can always throw out a skill when the time is right. In the early game, cooldowns are in the 30-40 second range, making them hard to rely on in the fast-paced wall-running, double-jumping action. But after investing credits in my character, those cooldowns dropped substantially to closer to ten seconds. It’s at this point that the combat truly comes into its own and Necromunda: Hired Gun makes the most of its own design.

The good news is that most of the rest of the mechanics back up the useable abilities. When you take damage, you have a window of a few seconds during which you can recoup health by dealing damage. This bonus increases based on your proximity to foes. The result? Gritty firefights where risk is constantly rewarded. With teleporting enemy types and militant dogs, cover is never an option. You need to get in to get the job done.

Fortunately, you have all the tools you need to close the distance. In addition to a dashing ability that teleports you to a target, the player gets a grapple-hook, double jumps, a quick dash, and wall-running. The last is janky and unreliable, but largely unnecessary. The rest more than do the job.

There are a wide variety of enemies for the shooting, too, and very few of them are bullet sponges. Combine that with everything else and Necromunda: Hired Gun becomes a fast, action-packed shooter that doesn’t waste its time or yours.

Necromunda: Hired Gun has loot, but the number game here isn’t typical. Every copy of a gun has identical stats at each rarity level. One purple Autopistol is the same as the next. Duplicates, then, get sold off. Which is fine, because you barely have any inventory space when it comes to most equipment. Archeotech and Lucky Charms get attached to weapons, increasing damage and your chance for credits to drop from defeated foes. Items increase stats like health, critical chance, and loot, but their values are so low that incremental increases are unnoticeable. In fact, you almost won’t notice the difference between common and legendary equipment until everything has upgraded. After all, 6 and 11 more max health aren’t all that different in the grand scheme of your health pool when you’ve only equipped one. Stacking a bunch of health items to get to 30 is substantial, sure, but it’ll take everything to get there.

The player’s rank unlocks gun skins, but has no impact on the quality of the items you find. They don’t have levels, only rarity, so the loot game ends once you’ve found the last rarity. The number climb isn’t akin to a loot, RPG game. They’re simple, small, and the search is short-lived.

Upgrades for your bionics are similarly small (for example, you can upgrade the range of your shockwave from seven meters to eight and its stun duration from 1.1 to…1.2. Unlocking every upgrade for an ability truly makes a difference, but it’s sometimes hard to devote resources to such small gains.

There’s some solid variety in the campaign and side missions. Most involve just clearing your way through enemies, but there are the occasional puzzles, point defense stages, and more sprinkled in. With side missions, you can choose which you want to tackle, unlocking higher difficulties as you progress. These barely impact risk, but hugely grow your reward. In just a couple of minutes, I was able to make nearly $130 grand, enough to upgrade several abilities to their max level.

You can also mod weapons with that money, but the effects are mostly superfluous, like the rest of the equipment.

I did have some grievances, beyond the unengaging (and ignorable) loot: like I said before, the wall-running was spotty enough I never bothered to use it. The stage design rarely asked me too, and every other tool in my belt was significantly more reliable while achieving the same job. Even wall-jump platforming sections are just as easily handled with a double jump, dash, and grapple looped together. More of a learning curve was handling the stubborn animations. Basically, if you start pulling down one of the triggers (to aim down sights or fire your gun) during a reload animation or skill cast, it won’t take. It can be incredibly frustrating to hold down the “shoot” button in a shooter and not have it…well, shoot. It’s the kind of detail you have to go without to realize how sorely you miss it. Still, I was able to adjust throughout my play time and only fell into that trap a couple of times by the end.

After the thirteen story missions and fully upgrading my character, there’s little compelling to do. Performance is scored, but a B and an A are all the same to me. Side missions are each assigned to a clan (which has no noticeable effect on enemy variety or gameplay), but grinding them out does fill a bar in a menu. I’m more likely to strive for that in post-review playtime, by virtue of the just-one-more length (two to five minutes each, versus the campaign missions’ 20 to 50). It’s too bad there’s nothing more exciting to do, especially because the gameplay has truly hit its stride now that my character is fully upgraded.

On our PS5 review copy of Necromunda: Hired Gun’s environments are easy to look at and decently varied for all being on a shitty planet. The guns have a satisfying shine and sound good to boot. Character models don’t benefit in the same way, with stiff animations and dead-eye faces, but they do their job when it comes time to shoot them.

Necromunda: Hired Gun is mostly well put together, but some glitches distract. The options menu struggled to register changes, and I once ended up unable to read my tiny menu screen when my perspective was drastically pulled away. I only dealt with two crashes throughout the eleven hours, but the autosaving prevented me from losing much progress.

The music worked in context, but wasn’t mind-boggling or memorable in any particular way. Better than the cutscenes. Most of them were first person, and I had to adjust to having no control over the camera during scenes that in most game would have me do the walking and looking without issue. Third person scenes were infrequent, which I couldn’t have been happier with as my character’s face didn’t exactly look the part.

Necromunda: Hired Gun is a solid shooter. The loot system can feel a little under-baked; wall-jumping isn’t sufficiently integrated into the level design; and finicky triggers can frustratingly put a pause on the action. All that mentioned, Necromunda: Hired Gun delivers in the part that matters. The healing system adds a dash of risk/reward balance to a fluid, fast combat system. Low cooldown abilities (once you’ve done the grind) add an extra flavor that elevates the entire experience. It’s definitely short, but 11 hours is kind of my sweet-spot for single-player shooters anyway. If you’re looking for something to satisfy you after your time off from Doom: Eternal, then you could do a whole lot worse than Necromunda: Hired Gun.

Alright, so skip the wall-running and spare yourself investment in the loot and story game. But that doesn't mean you need to skip Necromunda: Hired Gun, a short but great fast-paced shooter.

Brutal Gamer's Nintendo Editor began his gaming life a little late- at five years old. But he's made up for it in the two decades since, gaming and writing about gaming with the same passion, fervor, and unrelenting love as his five-year old self.
Previous Jurassic World Evolution 2 Coming 2021
Next E3 2021: Xbox shows off Halo Infinite’s multiplayer, plus a cinematic