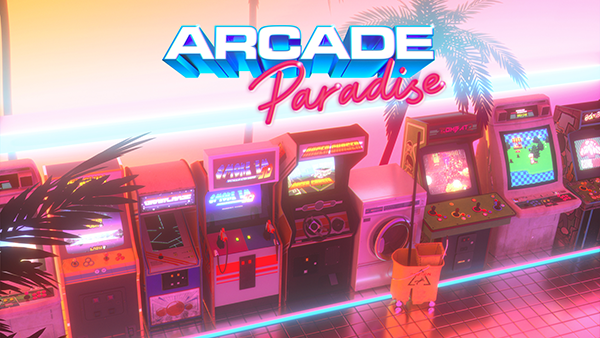 No, that’s not a typo, Arcade Paradise is a game about running a laundromat. Though this particular one aspires to be something greater.

Paradise by a neon light

Pretty much anyone over a certain age can remember playing arcade games. And if you’re anything like I am, then you likely remember playing them basically anywhere other than an actual arcade.

I can recall spending more than a few hours, playing in my local pizza shops… and laundromats. It’s funny, but seemingly every one of them had arcade games, and that’s kind of the premise of Arcade Paradise.

Revealed at this weekend’s E3 (virtual) show, Arcade Paradise sets gamers in the role of Ashley, who’s just taken over the family business – King Wash Laundry. But Ashley has bigger dreams than folding people’s wash, and plans on slowly converting the place into a den of neon and video screens.

From Nosebleed Interactive and Wired Productions, this is Arcade Paradise.

Arcade Paradise is a 90’s-fuelled retro arcade adventure. You play as Ashley, and you’ve just been given the keys to the family laundromat. Rather than washing rags for a living, you decide to turn the laundromat into the ultimate arcade. Choose from over 35 games to be in the arcade inspired by three decades of gaming – all of which are playable with high scores to set. Stay one step ahead of your father, manage and invest profits, and build your very own Arcade Paradise!

Ready to play, profit, and purchase? There’s no release date just yet for Arcade Paradise, but you can expect to see it eventually land on the PS4, PS5, Xbox One, Xbox Series X|S, Switch, and PC.

Jason's been knee deep in videogames since he was but a lad. Cutting his teeth on the pixely glory that was the Atari 2600, he's been hack'n'slashing and shoot'em'uping ever since. Mainly an FPS and action guy, Jason enjoys the occasional well crafted title from every genre.
@jason_tas
Previous Supernatural thriller Trese goes back for 2nd printing as Netflix series debuts
Next E3 2021: Rainbow Six goes full sci-fi with Extraction