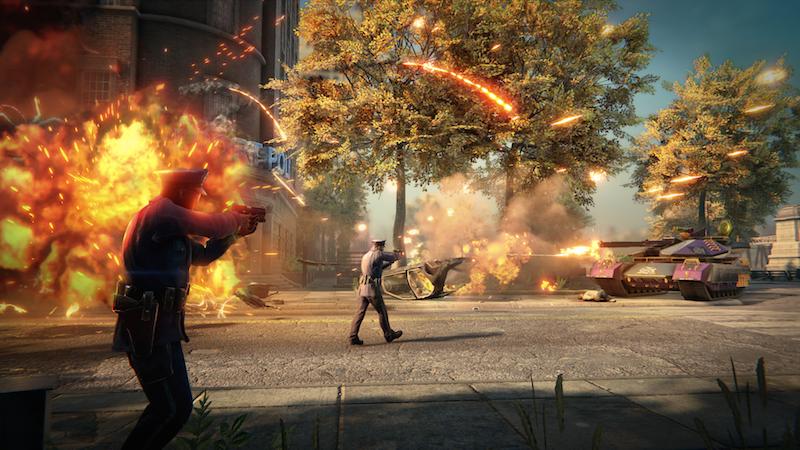 Nope, you’re not done with Saints Row: The Third Remastered just yet. And just when you thought the game couldn’t get any more Remastered-ed.

Now, this isn’t actually another remaster of the remaster of Saints Row: The Third. Did that make sense? Well either way, today’s Saints Row news involves the more recent re-release of the game receiving a next-gen bump for the PS5 and Xbox Series X|S.

The conversion to current consoles means that The Third will be running at what’s equivalent to the PC edition’s “high” setting. That means “lighting, texture resolution, and other visual effects” will all get a significant boost.

Frankly, if you thought the game looked good already, you ain’t seen nothing yet.

Framerate is improved across next-gen consoles to offer the smoothest possible gameplay. Players will be able to enjoy the game running at 60 frames per second and dynamic 4K resolution, keeping the action fluid.

Xbox Series S owners get an additional option to enjoy the game in two modes that better cater to individual player preference. Play in either Performance Mode, which keeps the gameplay locked at 60fps with a 1080 resolution, or Beauty Mode that locks the gameplay to standard 30fps while employing an upscaled 4K resolution. PlayStation 5 owners will be able to enjoy Activities support, as well as a subtle signature Saints purple glow on the DualSense controller.

And finally, if you already own a copy of the Remaster, then you’re in for a treat. As has become commonplace this generation, Saints Row The Third Remastered will grant free copies of the PS5 and Xbox Series X|S versions to those who already own the last-gen versions. Those will come via Free Upgrade and Smart Delivery, respectively.

Look for Saints Row The Third: Remastered on the PS5 and Xbox Series X|S this month, on May 25th. Oh, and if you’re a PC gamer, then you should be on the look out as well. Both Steam and GOG editions will be arriving a few days ahead of the console versions on May 22nd.

Jason's been knee deep in videogames since he was but a lad. Cutting his teeth on the pixely glory that was the Atari 2600, he's been hack'n'slashing and shoot'em'uping ever since. Mainly an FPS and action guy, Jason enjoys the occasional well crafted title from every genre.
@jason_tas
Previous Batman: The Long Halloween, Part 2 gets a first look
Next Tech-On Avengers brings high-tech action to Marvel Comics this August