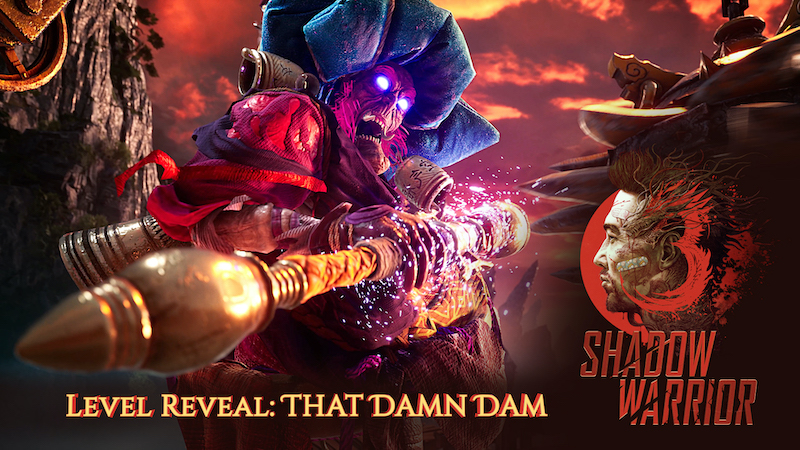 Too much is never enough when you’re talking about Flying Wild Hog and Devolver Digital’s upcoming Shadow Warrior 3. So here’s some more!

the third entry in the series, Shadow Warrior 3 continues to look like a first-person shooter that genre fans should be watching. In the latest trailer for the upcoming title, we get a first look at That Damn Dam.

A level in the game, That Damn Dam features something that looks to play a big part in SW3; arena kills. Though that’s not all that’s shown off in this video though, as a new gore weapon appears, along with one gigantic warhammer.

This video features a frenetic journey to the top of the titular dam where Lo Wang does battle with the Seeking Shokera, a flying enemy from which the Seeking Eye, a new Gore Weapon, can be torn and turned against multiple enemies! Finally, The Damn Dam features further environmental carnage with The Wrecking Ball – a skyscraper sized tower with which Lo Wang can wipe out scores of enemies using expert timing and a giant spiked ball-and-chain.

Like what you see? Kind of tough not too honestly. Shadow Warrior 3 is looking great, though is seems to still be a ways off. While there’s no firm release date just yet, we do know that it’ll be arriving some time this year for the PS4, Xbox One, and PC.

Jason's been knee deep in videogames since he was but a lad. Cutting his teeth on the pixely glory that was the Atari 2600, he's been hack'n'slashing and shoot'em'uping ever since. Mainly an FPS and action guy, Jason enjoys the occasional well crafted title from every genre.
@jason_tas
Previous Trailer: Zombie Army 4’s third season kicks off
Next Trailer: A final look at Hood: Outlaws & Legends as it arrives tomorrow