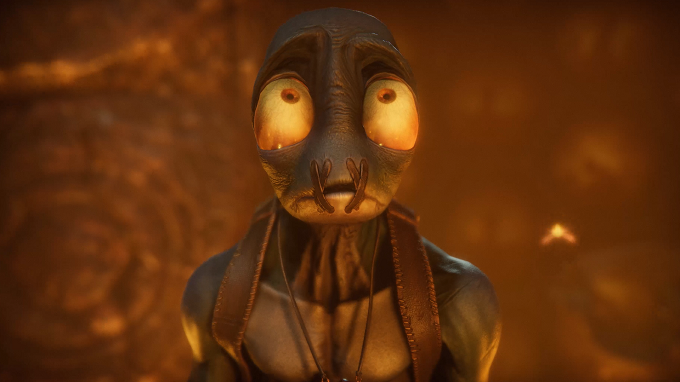 The reborn Oddworld series rolls on, into what’s being touted as the sequel that Oddworld Inhabitants always meant to produce.

Oddworld: Soulstorm was originally announced way back in 2016 as a follow-up to the recent Oddworld: New N’ Tasty. Set to modernize the second game in the original Abe Quintology, Soulstorm would bring a new coat of paint to a classic in the puzzle-platformer genre.

In 2021, Soulstorm is finally here as a Playstation and Epic Store exclusive. The wait was well worth it as Oddworld Inhabitants have crafted a true next-gen Oddysey, though one that’s hampered by minor technical hiccups.

Soulstorm picks up moments after the true ending of New N’ Tasty. Abe has succeeded in rescuing all 300 of his Mudokon family. During the celebration at their hideout, the Mudokons accidentally ignite the stores of flamable Soulstorm Brew, outing them immediately to the Glukkon, Molluk, who was seeking revenge for the destruction of Rupture Farms. There is a lot to go into as far as lore is concerned, but essentially, the Glukkon race has forced the entire Mudoken race into slavery. Soulstorm follows Abe on his journey to rescue more Mudokons and put a stop to at least some of the industry forces compelling his race into labor.

People who have grown up with Abe will easily recognize the themes, but just because it is standard for the series at this point, doesn’t make it any less poignant. Throughout the game, the mission gains clarity, and certain ending options open up or become closed off depending on how well you performed up to this point.

Soulstorm brings the importance of saving the vulnerable Mudokons throughout the level to light, because two of the game’s final levels and the true ending is locked behind satisfying the narrative goal of the gameplay. In New N’ Tasty, there was always a counter for the Mudokons that needed saving, but in Soulstorm you’re constantly reminded and rewarded, or deprived, based on the effort you put in. It adds a certain gravity to each level and each significant plot point. I like the weight, and each save or loss held weight.

At the core, Soulstorm is a retelling of Exodus, but don’t get it twisted. This is a vastly expanded game with a much wider scope than the original sequel.

The main gameplay is presented in side scrolling form (kind of- we will get to more of this info in the next section). Abe has a robust control system including the ability to sneak, sprint, jump and throw things (again, we will get to this soon).

I was a bit taken aback when I first picked up ther controller. In classic Oddworld, control was a little bit tougher. Here, it is easy to control Abe in everything he does to manuever the complicated maps. Some might not like the change, likening the classic system to a more challenging or systematic style of platforming, but the new one works great. Even a double jump, which I initially even forgot about, is a welcome addition to Abe’s tool set.

Once you get over the additions, the game play is classic Oddworld. Start a level in a location, avoid death, outsmart enemies, meet friends and lead them to safety before moving on. The biggest things to address are the changes to possession and the crafting system that has been introduced.

First, the familiar. Abe has always had the ability to chant and possess enemies in certain areas. The game stops the player from abusing this by placing jammers throughout, another familiar tactic for fans of the series. The most recent iteration of chanting gives Abe additional power based on how many followers he has at any given time. Additionally, the possession can be used to stun enemies instead of causing them to explode once they wear out their welcome. These enemies can then be pick pocketed and tied up, if you have the right tools.

Tools. Right. Something that I was apprehensive about was the introduction of crafting and tools. Abe can find various items like rocks, stun mines, Soulstorm Brew and more throughout the levels. Ingredient items can also be found and crafted into these, which are then employable to deal with sligs and other enemies.

Tools and crafting is a great addition. In my time with the game, I was always able to craft the items that I needed, and the levels provided the necessary ingredients. The system could have easily turned frustrating if materials were scarce, but OI never had this problem. It is also very satisfying to know that the reason you can dispatch enemies so easily is that you took the time to search out the environment.

There is also enough variety in enemies, tools, environment and puzzles that it is easy to say that fans of the series will not get bored working through the game, and will often delight in taking the time to search out the less-obvious Mudokens in each stage.

Now, it is entirely possible that I had these problems because I am playing the game on a base, launch-day PS4, but, and this is especially true in the early levels and levels with a lot of background things going on, there were some big frame drops. I don’t particularly mind these, but I know some players are real sticklers for drops.

Aside from the drops, the game is gorgeous. The backgrounds are well-realized and vibrant, Abe looks better than he ever has before and everything else, from effects to death animations look great.

Soulstorm markets itself as a “2.9D” game, and it becomes clear in the first few minutes why. All the action takes place in a standard 2D space, but it actually takes place in 3D levels. The best way to explain this is that the path Abe is on turns and integrates with the depth of the levels. This isn’t purely aesthetic, either. If you try to throw an item on a curve, it will go right off the path and out of frame. This changes the way I interact with the levels and the way we progress through as players.

Finally, there are a few things I noticed early in on my time with the game, such as the stun-mines not working, despite detonating on the sligs. There were a few other bugs the developers warned about, but they have since been fixed in patches.

A break for freedom

In all, Soulstorm has everything I was hoping for in a sequel to New N’ Tasty. The graphics are clean and really allow the intent from Oddworld Inhabitants to shine through. Some might take the cleanness of the graphics as a negative, given the graininess of the first few games in the series, but the new clean look and revamped gameplay mechanics make Soulstorm a joy to explore, especially for longtime fans of the series.

A copy of Oddworld: Soulstorm was provided by Oddworld Inhabitants, Inc. for this review

Back to the grind

Oddworld: Soulstorm does an amazing job of bringing the classic Oddworld formula into 2021. I can't wait to see what Lorne and Co. have cooking for Abe's next adventure.

Erich was introduced to gaming by his grandfather before he could walk. Since then, he has grown up loving Nintendo and most games in general. He couples his love of videogames with journalism to cover news, provide reviews and tell it how it is in the gaming world.
Previous You have the power with Factory Entertainment’s new He-Man power sword replica
Next The Test Drive series returns with NACON’s Solar Crown