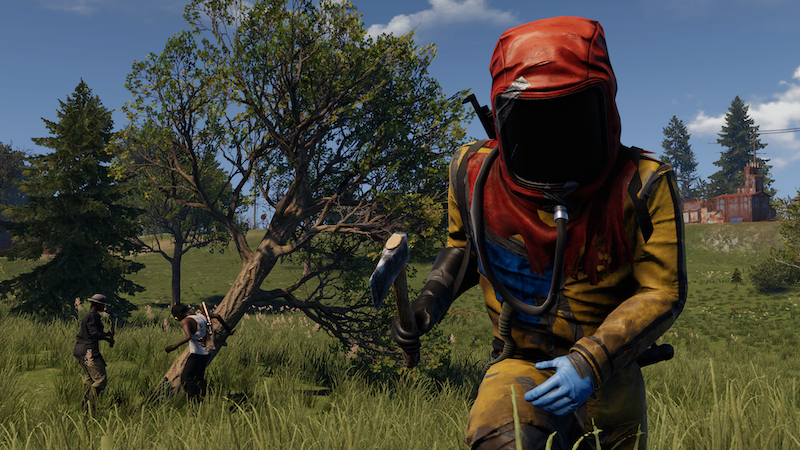 Survive, at all costs. Double Eleven’s open-world title Rust is coming to consoles this year, landing on the Xbox One and PS4 this spring.

In Rust, there is one goal above everything else: survive. Conquer thirst and hunger, battle the elements, create clothing and stay safe against hostile forces including other players, scientists, bears, wolves or even succumb to fire, drowning or radiation poisoning. A game without rules, Rust doesn’t tell its inhabitants what to do. Players are free to be deceptive and aggressive with intense player vs. player combat, raiding and looting, but there is potentially even more to be earned with a team of friendly players by your side. In the struggle for survival and supremacy, players can build tiny cabins in the woods to huge scrap metal fortresses in an attempt to stay safe, as well as craft a variety of weapons, bombs and traps.

Billed as the “ultimate competitive survival experience on console”, the console version of Rust promises 100-player online games. It also promises much of what the PC edition offers in terms of gameplay, which means a tough and unforgiving experience. Apparently, Rust players are quite the cutthroat crew, and all you get to start out is a rock and a torch. So, yeah.

Rust on the Xbox One and PS4 has no release date just yet, but you can expect to see it wash up on the console-shores some time this spring.

Jason's been knee deep in videogames since he was but a lad. Cutting his teeth on the pixely glory that was the Atari 2600, he's been hack'n'slashing and shoot'em'uping ever since. Mainly an FPS and action guy, Jason enjoys the occasional well crafted title from every genre.
@jason_tas
Previous E-Win Champion Series gaming chair (Furniture) Review
Next Trailer: Monster Energy Supercross revs up for launch