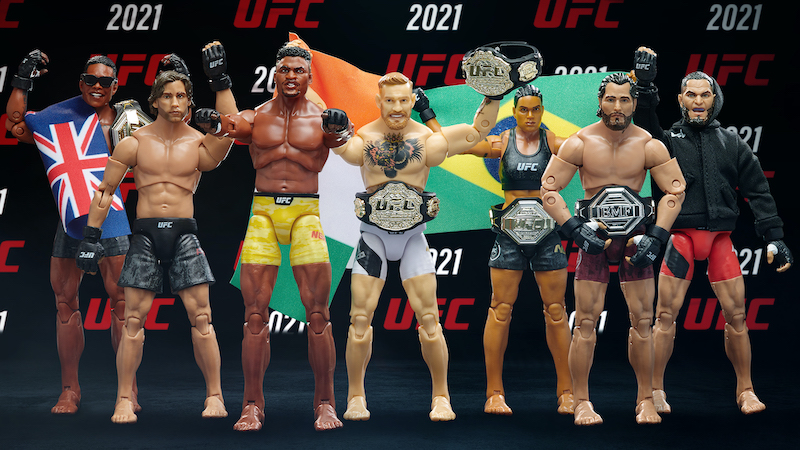 UFC and Jazwares enter the octagon as figure line expands

Entering round 2 is Jazwares’ UFC lineup of action figures. Conor McGregor, Amanda Nunes, and more huge names are all coming up in the second wave.

Are you a UFC fan who also happens to be an action figure collector, or are just looking out for some cool fight-themed collectibles? If so, you’ll definitely want to take a look at the latest from Jazwares.

The company made a splash with the UFC license at the last Toy Fair, serving up an initial wave of fighters that starred top notch likenesses and mixed-media accessories. Now a year later, Toy Fair might be postponed but the announcements from the company aren’t. And for 2021, they’ve added some monster names to what’ll be wave 2 of the UFC line.

Among the fresh offerings are:

As you can see from the gallery, these figures will all sport the real fighter’s likenesses, and they’ll also be super-articulated with 23 points. Clocking in at 6.5″ each, the figures will also be packed with accessories like “fighter-specific flag, UFC champion belt, or other unique fighter accessories”. Add to that alternate hands and head sculpts, and you have a line that should make for some terrific displays. Or play too… if you’re actually buying these for kids.

Well here’s some happy news – the figures are ready for pre-order right now via either Ringside Collectibles or GameStop. As for launch, they’re tagged with a late-February launch at Ringside and it looks like GameStop will be shipping them in mid-March.

If you’d rather shop elsewhere, the UFC Store, Target, Walmart, and Amazon will all have them too. They’ll be stocking the figures around the same time as GameStop, in March.

Jason's been knee deep in videogames since he was but a lad. Cutting his teeth on the pixely glory that was the Atari 2600, he's been hack'n'slashing and shoot'em'uping ever since. Mainly an FPS and action guy, Jason enjoys the occasional well crafted title from every genre.
@jason_tas
Previous Marvel’s Morbius joining the One:12 Collective this fall
Next Trailer: Blood Bowl III “Super Bowl” spot raises a pint