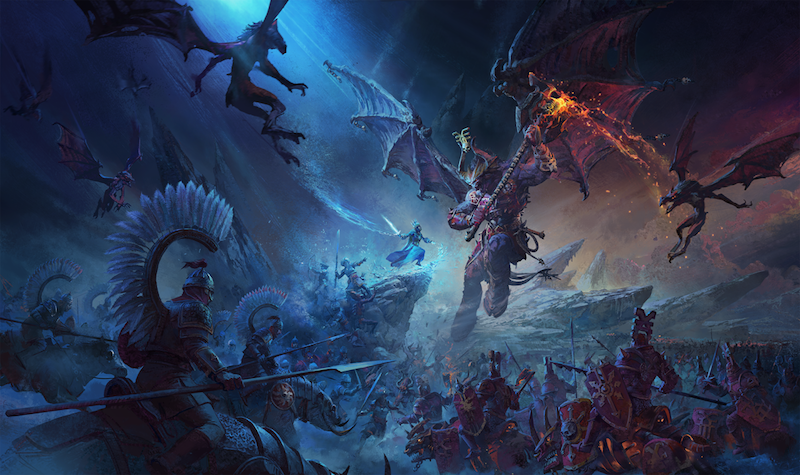 The armies of the Olde World will be on the march once again, as Warhammer returns to the Total War franchise later this year.

The Realms of Chaos rise

Oh those daemons, they just keep on popping back up. And of course, once that happens, you just have to knock ’em back down their hellholes. Or, alternatively, you could always take command of them and lay siege to the mortal realm. That’s just what’s on the horizon for PC gamers too, thanks to Total War: Warhammer III.

Yes, Sega and Creative Assembly’s long running tactical-strategy series is dipping its toe back in the Olde World for third time. And this time around, it’s all about the Chaos hordes.

In Total War: WARHAMMER III each choice you make will shape the reality-shattering conflict to come; from the mysterious Lands of the East to the daemon-infested Realms of Chaos. Experience strategy gaming on a scale yet unseen in this epic culmination to the Total War: WARHAMMER trilogy.

So, with the above in mind, could this be the last game in the Total War: Warhammer series? It seems likely, though if part 3 does sell well, I’d imagine that a new story arc could easily pop up for a 4th installment.

As it is, Total War: Warhammer III has a tale that sounds like it should be a good one. According to the press release, the narrative surrounds either “saving or exploiting the power of a dying god”. That sounds pretty interesting, and will cover a number of races from the Warhammer world. All of the playable armies will have their own path through the campaign, which will reportedly culminate in “an endgame that will determine the fate of the world”.

Along the way, gamers can expect to see the Total War debuts of the cities of Kislev and Cathay, and the first appearance of those Chaotic gods themselves – Khorne, Nurgle, Slaanesh and Tzeentch.

While that should be plenty to whet your appetite for a little more armed conflict, this one’s still got a ways to go. Steam’s listing for Total War: Warhammer III simply has a tag of “late 2021”.

Jason's been knee deep in videogames since he was but a lad. Cutting his teeth on the pixely glory that was the Atari 2600, he's been hack'n'slashing and shoot'em'uping ever since. Mainly an FPS and action guy, Jason enjoys the occasional well crafted title from every genre.
@jason_tas
Previous 1More Comfobuds (Gear) Review
Next Marvel’s First Family gets the “Life Story” treatment in new mini