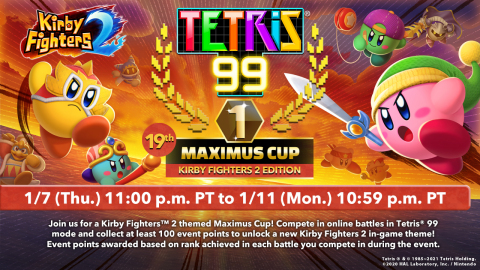 A super light week for the Nintendo Download brings Kirby-fueled Tetris action, as well as a few possible indie gems. Check out the full listing.

Yes, it’s January alright. And even though there are a good number of people out there happy to see the turning of the year from 2020 (not that it has seemed to matter much), the New Year also means a gutted release schedule.

But even with painfully little to get excited for this month in the world of video gaming, there are still a few bright spots for Nintendo fans. The Switch receives a Kirby update for its free-for-subscribers Tetris 99 game, as well as a small selection of indie titles.

Among those are Wrestling Empire and Werewolf: The Apocalypse – Heart of the Forest. With a much bigger, studio release coming this year for the Werewolf IP, this adventure game set in the tabletop game’s universe might be just the ticket to tide fans over. As for Wrestling Empire, it’s a retro-looking game (designed to be 64bit-ish) that reportedly sets players to task running a wrestling career. That comes with all the trimmings, including contract negotiations and more. A very interesting concept.

Here’s the full list of what’s hitting this week:

Jason's been knee deep in videogames since he was but a lad. Cutting his teeth on the pixely glory that was the Atari 2600, he's been hack'n'slashing and shoot'em'uping ever since. Mainly an FPS and action guy, Jason enjoys the occasional well crafted title from every genre.
@jason_tas
Previous Fatal Fury First Contact (Nintendo Switch) Review
Next The King of Fighters XV revealed