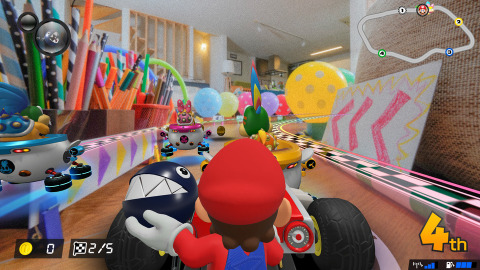 Yes, it’s here. Or, it almost is anyway. Mario Kart is coming to your house this week, thanks to Mario Kart Live: Home Circuit. And yeah, there’s other stuff too.

Let’s be honest for a second here – the rest of the Nintendo Download isn’t anywhere near as interesting as Mario Kart Live. It just isn’t. I mean, it’s Mario Kart racing, brought into the real world, with some of the coolest AR tech I’ve seen.

The game, which is effectively a remote control racer that works with the Switch, allows players to set up and race through Mario Kart tracks in real life. There are hazards, power-ups, competing racers… everything that makes MK so much fun. But of course, the hook is that you set up the courses in your own house (or wherever).

Mario Kart Live hits retail tomorrow, and could be brutally hard to find this Holiday season. So, if you want one and you see either a Mario or Luigi box set, you might want to consider grabbing it.

As for the other stuff… eh, there’s actually some good stuff. 9 Monkies of Shaolin looks pretty cool, as does Green Hell. Then there’s The Jack Box Party Pack 7, the new Zoids game, and a bunch of others. I can’t say any of it sounds or looks as awesome as Mario Kart Live does, but maybe that’s just me.

Jason's been knee deep in videogames since he was but a lad. Cutting his teeth on the pixely glory that was the Atari 2600, he's been hack'n'slashing and shoot'em'uping ever since. Mainly an FPS and action guy, Jason enjoys the occasional well crafted title from every genre.
@jason_tas
Previous Trailer: Raji launches on PS4, Xbox One, and PC
Next Trailer: Modus Games’ Cris Tales delayed into 2021