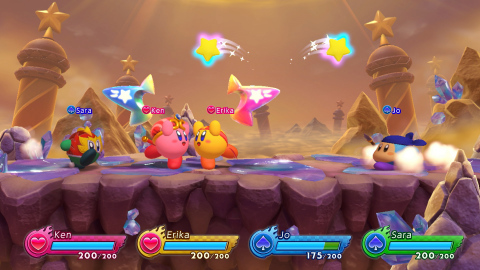 Kirby Fighters 2, the next chapter of Rocket League, RollerCoaster Tycoon 3 Complete, and lots more hit the Nintendo Switch this week.

If you were perusing BG the morning, you already know all about Kirby Fighters 2. The four-player Smashlike is out now on Nintendo’s Switch, glowing gamers to play as multiple versions of the company’s little blobby hero. That’s in addition to a few of the series’ baddies, all of which are playable in a handful of modes.

If Kirby isn’t yours thing though, there still might be something for you this week. RollerCoaster Tycoon 3 Complete hits as well, and if you’re into park-builders it’s looking pretty great. Then there’s a trio of SNES games, an NES offering, and a bunch of smaller releases.

Jason's been knee deep in videogames since he was but a lad. Cutting his teeth on the pixely glory that was the Atari 2600, he's been hack'n'slashing and shoot'em'uping ever since. Mainly an FPS and action guy, Jason enjoys the occasional well crafted title from every genre.
@jason_tas
Previous Surprise! Kirby Fighters 2 is live on Switch now
Next It’s unstoppable vs Incredible in Juggernaut #2