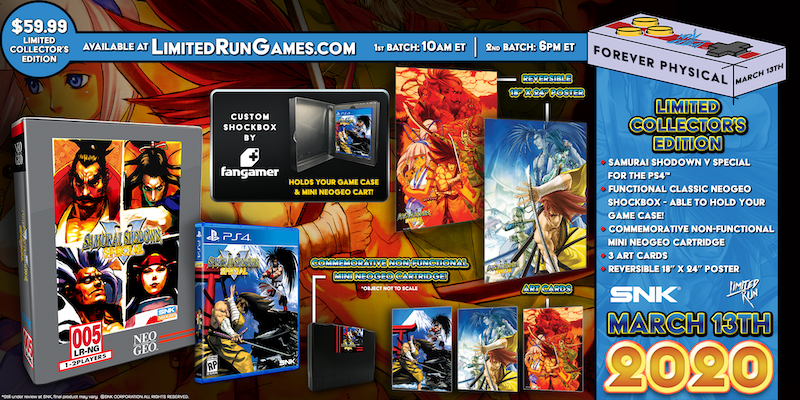 Limited run gets Samurai Showdown V and more this week

There’s a good deal of Samurai Showdown hitting Limited Run Games this week, along with Tiny Metal Ultimate, and the Bloodstained soundtrack.

With Samurai Showdown’s reboot still making an impact on consoles, and just hitting the Switch, Limited Run Games has a selection of classic Showdown’s all set to go.

Both Samurai Showdown V and VI are on the way to the service, for publication on the PS4. That includes a special edition that’s loaded with extras, including a mini-SNK cart.

Samurai Showdown V will hit in a pair of batches, one at 10am eastern time, and one at 6pm. The boxed title will run you $29.99 USD. In addition to the standard version above, LRG will also stock a collector’s edition.

If you’ve ever bought a game from Limited Run, then you know this one will probably go fast. It’s set to go on sale at the same times as the standard version, and will include “a custom shockbox by Fangamer, a commemorative mini NEOGEO cartridge, art cards, and a reversible poster. Priced at $59.99.”

Also included in this sale is Samurai Showdown VI, also for the PS4. There’s no CE for this one, though it’ll hit right alongside the two flavors of SSV. Like the standard version of that game, it’ll cost you $29.99 USD.

Outside of the PS4/SNK onslaught this Friday, there’s also a Switch game to be had. This one’s a little different, because though it starts up at 10am this Friday, it’ll be available for sale for a full two weeks.

Tiny Metal Ultimate is a combo cart too, so you get a pair of games. It combines both Tiny Metal and Tiny Metal: Full Metal Rumble, and will run you $39.99 USD.

And finally comes Bloodstained: Ritual of the Night Soundtrack. A “quadruple LP”, this set includes 4 records, as well as an autographed card signed by Michiru Yamane and Koji Igarashi.

There’s no price for this one announced, but it will only be available at 10am. So if you want it, make sure you’re there.

Jason's been knee deep in videogames since he was but a lad. Cutting his teeth on the pixely glory that was the Atari 2600, he's been hack'n'slashing and shoot'em'uping ever since. Mainly an FPS and action guy, Jason enjoys the occasional well crafted title from every genre.
@jason_tas
Previous Need for Speed Heat’s March update brings new cars and more
Next NECA extends Loot Crate agreement with 3 more Crates