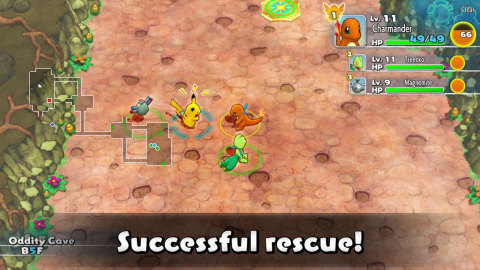 Nintendo Download: Become a Pokémon and Plunge into Dungeons

Go dungeon diving with the Pokemon Rescue Team, play through Langrisser I and II, and more this week on the Nintendo Switch.

That other Pokemon series

As opposed to the main Pokemon series, the Mystery Dungeon games get precious little hype. Yes, they’re a side-series, but they’re still Pokemon. So if you’re a fan of the pocket beasties, then you might be into this week’s big release on the Switch.

That, of course, is Pokemon Mystery Dungeon: Rescue Team DX. With some 400 pocket monsters to play with, and “mysterious, changing dungeons” to plumb, this is one that could hit the Poke-spot.

Aside from the above, Langrisser I and II land on Switch this week too. From NISA, these two old schoolish JRPGs should keep you busy for a good long time.

*Additional games, systems and/or accessories may be required for multiplayer mode; sold separately.

**Full version of game required to use DLC; sold separately.

Jason's been knee deep in videogames since he was but a lad. Cutting his teeth on the pixely glory that was the Atari 2600, he's been hack'n'slashing and shoot'em'uping ever since. Mainly an FPS and action guy, Jason enjoys the occasional well crafted title from every genre.
@jason_tas
Previous Part 1 of Luigi’s Mansion 3’s multiplayer mode is here
Next CEEK 4d Advanced headphones (Gear) Review