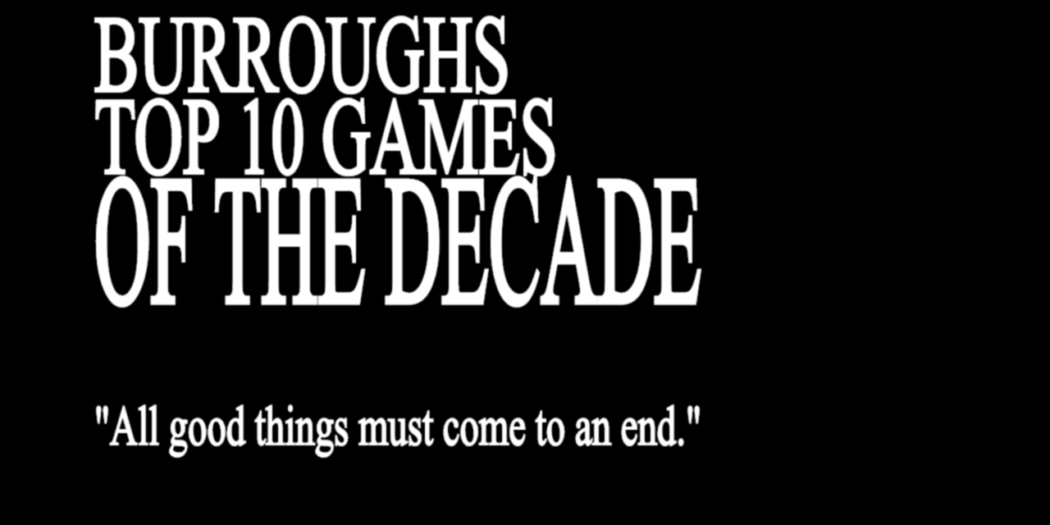 The 2010’s were packed with great gaming experiences. Now we’re looking back at our favorite titles as the decade comes to a close.

Hi. I’m Benj and I’ve been writing for BrutalGamer for over 5 years now and I’ve mainly covered RPGs and Resident Evil games but I play a lot more games than that. Today I would like to talk about my Top 10 Video Games of the Decade.

Skyrim is a bit of a meme in that it is almost guaranteed to be released alongside a new build or a new console. But Skyrim is, without a shadow of a doubt one of the best games of this decade. This masterpiece has helped shaped how we perceive and experience the open-world genre and it opened a heck of a lot of doors of the games that followed it.

You know I’m a bit of a JRPG nut but Shin Megami Tensei IV is a game that both scares and fascinates me. It follows the classic Shin Megami Tensei formula where you’re a blank slate of sorts stuck between the divine war of the demons and the gods but just like every other Shin Megami Tensei game, this is an unforgiving JRPG that wasn’t made to entertain fans, it was made to challenge them and boy was I challenged the first time I played this. In the end, my journey with Flynn ended on a happy note after about 3 breakthroughs because I was doing my best to get the neutral ending so that I could end up with Isabeau.

Fun Fact: My gaming tag, Burroughs, is something that I picked up from Shin Megami Tensei IV. Flynn has a sort of a fairy-type AI that follows him around, just like every other Samurai around him, called Burroughs. This particular AI was voiced by Ali Hillis who also voiced Lightning, my personal favorite in terms of Final Fantasy protagonists.

If Skyrim paved the way for single-player open-world games then Grand Theft Auto V paved the way for open-world multiplayer games because it is probably rarer to find someone else who hasn’t role-played on any of those community-driven Grand Theft Auto V private servers. It’s an interesting phenomenon that has been plaguing the streaming world lately and it’s sure to go on for quite some more time because it’s just downright fun.

Joel and Ellie will forever own a special spot in my heart because who isn’t a sucker for these kind of stories where two very different people slowly come together under the relationship of familial bond, loyalty and trust. I loved their journey and the world depicted in the hit Playstation 3 game might be a bleak one, but it had hope in it and I sure as hell am excited for The Last of Us 2.

If Final Fantasy XIII was a hot-mess of linear corridors and “under-developed characters” then Final Fantasy XIII-2 was the trilogy in its full-might with a relatively revamped battle system that both showcases the best parts of the the trilogy as well as innovating it just enough for the game to be entertaining.

In my opinion, the world of Final Fantasy XIII gets too much flak for being unraveled through journal entries and additional out-of-game lore but at the end of the day, I love the characters and I think that they deserve a spot in my top 10 games of the decade, at the very least XIII-2 that is.

Can an open-world video game be too big? In my opinion, it can and Monolith Soft’s Xenoblade Chronicles X has challenged the trope and proved victorious against it in this more than 200 hour video game that was too big even for me. The characters aren’t anything to write home about but the MUSIC and the MMO-ish gameplay astounded me.

Xenoblade Chronicles X is one of Hiroyuki Sawano’s (Attack on Titan, Aldnoah.Zero) finest works and it’s a heck of a gargantuan JRPG and it can definitely stand toe-to-toe with the biggest RPGs of today. Now if only this game wasn’t a Nintendo Wii U exclusive…

I have never been a fan of The Legend of Zelda before Breath of the Wild. How could I have been, I have never really owned a Nintendo console outside of my Family Computer back in the 90s and back then I only played a few games due to my strict upbringing. It wasn’t until the release of the Sony Playstation that I discovered my love of Games but it wasn’t Breath of the Wild where I discovered that not only is the franchise amazing, it was also capable of carrying the Nintendo Switch’s release all by its lonesome.

I fell in love with the unique cast of characters and the relatively dystopian and almost bleak world of Breath of the Wild was enough of an epic for me to rate this game so highly.

When I was younger, I thought that I would never ever love another game like I loved Final Fantasy VIII. It was a horrible cycle where I’d get my hopes up only for it to be crushed by unmet expectations. I faced Kuja in 9, Sin in X, I traversed through the world of XII with Ashe and co. and I helped Lightning and her friends kill God in XIII but Type-0 was a more humanized conflict between two cosmic-level entities and the divine comedy of the tragedies that befell Class Zero…at least until you fix the time distortion by playing the game over and over again until you break through the cycle.

I’m still waiting for Final Fantasy Type-1, which was teased at the end of Type-0’s HD remaster and for those looking for a more grounded and more human Final Fantasy experience then Type-0 is the game for you. Warning though, because this game traumatized me in a way that would be hard to explain without spoiling the ending of the game to you.

How long has it been since a video game release heralded the descent (and rise in popularity) for a certain type of game genre for over a decade? Obviously, Demon Souls was technically the first entry in the “Souls” genre (and it’s not even a franchise anymore, but a genre in my opinion) but Dark Souls helped solidify the mainstream popularity and appeal of the Souls games and it was a terrifyingly hopeless journey that ended up being the light in a world saturated with battle royale games and bland MMORPGs at the time.

Fast forward to 2019 and now we have Sekiro as the game of the year. How time flies, eh?

If Type-0 is my favorite Final Fantasy, then XV has my favorite cast among all of the Final Fantasy games because bromance, that’s why. I initially thought upon first watching the PSP-trailers back in 2006 that I’d probably hate Noctis and his friends and I am really glad to have been proven wrong. It’s a journey of love, of brotherhood and destiny and it was one that was plagued with problems upon its release. Now, it’s one of my best and favorite games for the decade and I wish I could relive that journey one more time.

At a glance, there’s really nothing special with Tokyo Mirage Sessions except that it’s the love child between Fire Emblem and Shin Megami Tensei. It has all of Persona’s glitzy and clumsy pizzazz as well as SMT’s intricate demon-rearing and weakness-hitting battle system and I really think it would have sold more copies and became more of a hit if it wasn’t so heavily censored and if it wasn’t a Nintendo exclusive.

Tokyo Mirage Sessions is basically Persona meets Idolmaster and it’s really hard not to love, to be honest.

I’m going to outright tell you now: I am a loyalist of the Black Eagles and Edelgard will always be my waifu but that doesn’t mean that I didn’t love my journey with Dimitri or my journey of discovery with Claude. It’s such a boring good versus evil story that was made extraordinary because of the talented voice cast as well as Fire Emblem’s signature characterization that made this game one of my favorite games of not just 2019, but of the entire decade.

It’s hard to talk about one game without the other two because that’s exactly what Peacewalker, Ground Zeroes and The Phantom Pain are. They are one game separated into three convoluted entries marred by the slow divorce between Kojima and Konami. Peacewalker had all of Metal Gear’s wacky tropes but all of that was killed off with Ground Zeroes and Phantom Pain and I consider the end of Metal Gear the end of my childhood because that’s exactly what it was, me realizing that I had already become an adult, having played a single game for a good chunk of 5 years from 2010 to 2015.

This is what I, Robot could have been but they spent too much money on hiring Will Smith instead of crafting the perfect waifu 2B. I jest, because this is an extremely nuanced if not somewhat of a niche JRPG but its poignant storytelling can only be matched by the spectacular visuals and action-packed gameplay that made this game everyone’s favorite JRPG in 2017.

Resident Evil 2 has always been my favorite game because it was my first entry but it was also the best entry in the original trilogy and I was overjoyed to have been able to play the remake this past year. This is the very definition of a remake and RE2 Remake’s release is this decade’s equivalent of the release of the original Resident Evil Remake. it is definitive and it changed the game for the better for sure. I’m still salty that this isn’t the Video Game of the Year but to me it is.

It’s hard to talk about RPGs without talking about The Witcher 3: The Wild Hunt because it’s just so damned good. Every single sidequest is worth playing, every single character is worth getting to know and GWENT. MY GOD, MAN, GWENT IS AMAZING.

The Witcher 3 is 10/10 for sure and I’m happy I was able to play it through all of its iterations in terms of combat, UI design and whatnot because I was able to experience first hand how the game evolved throughout its life cycle.

Without further ado, I am proud to announce that Persona 5 is my personal video game of the decade. For me, it is the best game in 10 years because it probably is. It has perfected the Shin Megami Tensei + Persona formula with excellent character writing, a compelling enough story to make it bearable to go through the initial 80-hours of the game, classic Shoji Meguro compositions that became instant classics (Rivers in the Deserts, anyone?) and just about enough Anime tropes to entertain everyone and their uncles.

Persona 5 is the perfect Persona game and in my opinion is not only my game of the decade, but an example of what a JRPG should be.

And that’s it. That’s my decade summed up in 2000 words or less. While I do feel the need to replay most of the games on the list, I will still cast my eyes over the horizon because I know that my next decade is just about to start.

Tags Best Of Games of the Decade