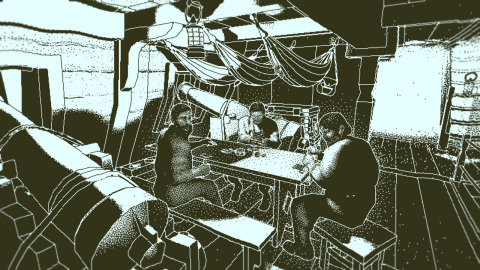 Time to get spooky! The Nintendo Switch gets a visit from the mysterious title Return of the Obra Dinn this week, the console’s only headline game.

Mystery on the high seas

Kind of an odd game for a headliner, as we’ve seen a bunch of big name games as of late, but nonetheless here we are with Return of the Obra Dinn. That’s not to say though, that this timely game doesn’t look cool.

Return of the Obra Dinn focuses on a missing ship, one that turns up five years past its scheduled arrival. With tattered sails and a missing crew, it’s up to players to figure out what happened. Not only does it sound good and creepy, but it’s also got a GameBoyish, monochrome aesthetic to its graphics, which is also pretty neat.

Though this one is the spotlighted game of the week, there’s actually a bunch more second tier titles hitting as well. New Arcade Archive and Sega Ages games are on the way, as well as new JackBox and Skullgirls games, and more.

Jason's been knee deep in videogames since he was but a lad. Cutting his teeth on the pixely glory that was the Atari 2600, he's been hack'n'slashing and shoot'em'uping ever since. Mainly an FPS and action guy, Jason enjoys the occasional well crafted title from every genre.
@jason_tas
Previous Arcade1up’s TMNT and Marvel cabinets launch today
Next The Art of Star Wars Rebels set for spring 2020