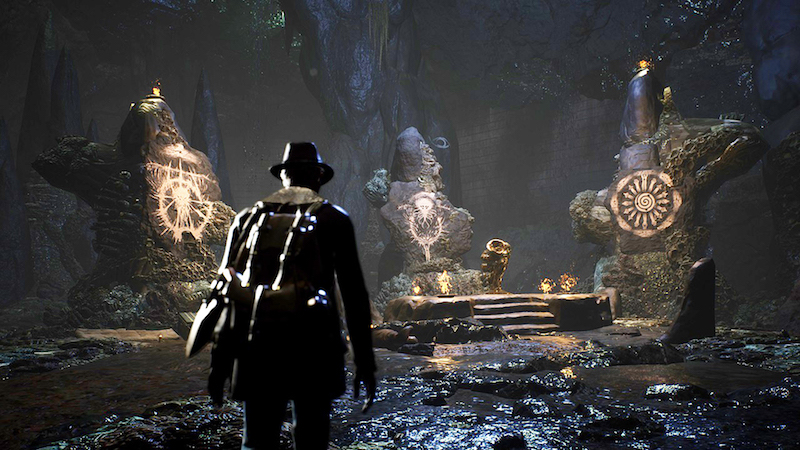 The dark Cthulhu universe comes to the Switch with a pretty great port of The Sinking City. Get your waders out, gas up the boat, and let’s have a look.

One of the more enduring, yet still fringe horror themes is H.P. Lovecraft’s Cthulhu mythos. Now don’t get upset but the “fringe” tag. I mean it in the nicest way possible.

I don’t think too many people would argue that Cthulhu is in the same league as zombies, vampires, and Frankenstein’s Monster. That’s not to say that it’s not popular though, as the otherworldly alien gods have a rabid fanbase. It seems to be ever increasing in notoriety too, with themes from the lore popping up in TV shows, movies, and of course games.

The Sinking City is one of those. It plays directly off of Lovecraft’s work, but still manages to forge some of its own paths through the waterlogged city of Oakmont, Massachusetts.

The Sinking City follows the adventures of a PI named Charles Reed. He’s been having nightmarish visions and ever more losing his grip on sanity. He feels a pull to Oakmont, like many others have as well.

After traveling there from Boston, Reed meets with his contact and sets out to solve his issues. There are people on the New England isle of Oakmont who can help him, or so he is told.

Before long though, he’s swept up into a grander adventure. It’s one where not everything is as it seems, insanity is just around the bend, and visions… well they might be more than just bad dreams.

That’s pretty much confirmed from the moment he arrives, since revolting beasts roam the island. Brought in by the flood, these things are more or less just accepted by the people of Oakmont, though they’re kind of off as well. There are ape-like residents and fish-like ones as well.

It’s all a part of the general weirdness that the City exudes. And fortunately, it’s all pretty cool.

There’s quite a bit going on in terms of gameplay in The Sinking City. While it’s basically an action/RPG, it also has a robust ‘detective’ element. Reed is a PI after all, so that makes sense.

You’ll fight monsters too though. Unfortunately the action isn’t as top notch as I would have liked. It’s not bad really, and I can’t say it wasn’t fun at times either, but it’s clear that The Sinking City isn’t an action title first.

No, it’s more about exploration and deduction. Developer Frogwares has made a bunch of Sherlock Holmes titles over the years, and you can tell. One of the best parts of the game is searching crime scenes, figuring out what happened, and then putting all of it together to solve the case.

While you’re at a crime scene though, you better watch your sanity. Reed has a kind of sixth sense, one that seems very reminiscent of the classic TV show Millennium. He can more or less see what’s happened, but in bits and pieces. You don’t get the whole picture and that’s important since the fun comes in putting it all together for yourself.

Once you activate his super-sense though he begins to have issues. Even using it a little bit will result in him batting nonexistent creatures away from himself in paranoid delusion. Or… is it delusion? The Sinking City does a spectacular job at times leaving you guessing.

As for the exploration elements, they’re pretty great too. The full island is available to traverse and poke around on, which is great since there’s a lot to do right form the jump. The game doesn’t really hold your hand in that regard either.

Since it’s partially flooded too, you’ll have to make use of boats to get around. The city has set up dinghies and makeshift ports every few blocks, and you’ll make use of them to make your way. Don’t worry, they’re not too aggravating.

If there was going to be an area where The Sinking City was going to suffer over its various other versions, this’d be it. And yeah, it does, though not by too much.

I haven’t played this game on any other platform, but the Switch version looks at least comparable. It’s not quite as sharp and detailed as the PS4 edition, but it’s certainly not bad looking either.

Its characters look great for the most part, though the city itself is a little drab and just a tad dull. The game keeps you moving at a decent clip though. So might not notice too much, since the locations you’ll visit are overall pretty cool, and plenty atmospheric.

I really dig this game. The Sinking City is dark, gritty, and sports a well detailed world to play in. As Cthulhu-inspired games go, I think this is pretty easily one of the best.

And if you’re looking for at least something of a horror experience on the Switch, The Sinking City is as good as I’ve played.

The Sinking City comes to Switch with a terrific port that plays great. And while it might not be as good looking as the other versions, it's still featuring some great graphics to boot. If you're looking for some horror to spook up your October, The Sinking City could well fit the bill.

Jason's been knee deep in videogames since he was but a lad. Cutting his teeth on the pixely glory that was the Atari 2600, he's been hack'n'slashing and shoot'em'uping ever since. Mainly an FPS and action guy, Jason enjoys the occasional well crafted title from every genre.
@jason_tas
Previous First PS5 details include launch window and more
Next NYCC 19: NECA debuts new Turtles figures