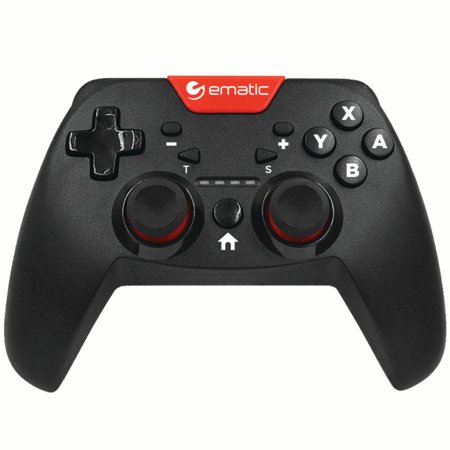 “Sorry, but I only have two regular controllers.”

You would wind up with some thing. Sometravesty. It was better not to play at all than to suffer through manufactured inferiority. There was no surer way to lose a match of Mario Kart (or at least no more convenient excuse) than to use a $30 controller whose insides you could see.

The Ematic Wireless N-Switch Controller still has a turbo button, and is still half the price of Nintendo’s Pro Controller, but it’s much better than the market’s history might have you believe.

Pairing was simple. I went to Controllers/ Change Grip/Prder, held down the controller’s home button until it flashed rapidly, and within 5-10 seconds was ready to go.

It was about this time that I noticed the controller’s stick placement was futzed with. Instead of the left stick appearing above the directional pad, both sticks were low and center (akin to the Playstation controller).

I’ll be honest with you, the button/stick setup is a great way to cramp up your hands, fast. The Ematic Wireless N-Switch Controller’s form factor is smaller than the Playstation controller, and angled more sharply at the top. I’ve got big hands, and controllers are already about as small as can be comfortable.

Your left and right bumpers have a nice mechanical feedback, and your triggers are standard affair. I prefer the directional pad of Nintendo’s Pro Controller and the Playstation 4 controller, and while the soft plus and minus buttons feel cheaper, the way they stick out makes them easy to find without looking.

On that note, the screenshot button is placed in a more accessible spot (just passed your face buttons), and sports that same easy-to-feel, easy-to-find of the soft menu buttons. Opposite, the turbo button waits eternally for a chance to do its thing.

In practice, the Ematic Wireless N-Switch Controller has a number of inconveniences. Unlike the rest of the controllers, from Pro Controllers to Joycons, you can’t just press A and have your controller connect when you start up the Nintendo Switch. You need to hold the Home button (found between the joy sticks). It’s equally inaccessible when you’re finished with a play session thanks to that submerged placement. That’s the trade-off you’ve getting for the screenshot button’s real estate.

I put the thing through its paces through a few days of Super Smash Bros. Ultimate. Some of my inputs were ignored in my first few matches, and even on the menu, but after the first hour, it seemed to figure itself out. By that time, everything was entered the way I expected, minus a few tilt-attacks. It felt a bit wonky at character select, too, sliding faster sooner than I’m used to.

When my controller finally got to low battery (the box promises about 20 hours, with a 2 hour charge-time; a fair 20-60 hours shorter than Nintendo’s Pro Controller, but on a budget, what can you do?), it was surprisingly whiny, giving me about six notifications in about twelve seconds. That can be quite distracting mid-match, so I plugged the thing in about as quick as you can imagine, and it got to work juicing itself up.

The Ematic Wireless N-Switch Controller is quite enthusiastic with its rumbling, too, which surely impacts the battery life more than is necessary, but it’s hard to hate it for trying.

Physically, aside from the smaller form factor and poor stick placement decision, it does have a great textured feel, like the cover of an expensive book, and I have no complaints about how the buttons operate.

For $39.99, then, you’re getting a functional, hand-cramping controller with a nice finish and a smartly placed, easy-to-find screenshot button. Set-up is easy, and it’s ready to go right out of the box, with substantial charge and an included cable when you need more juice.

I guess the days are gone when third party controllers could be easily discounted out of hand. But, in the spirit of easy excuses, I did get another character into Elite Smash right after switching back to Nintendo’s Pro Controller. Take from that what you will.

A review unit was supplied to BrutalGamer by Ematic

Ematic's controller operated better than I hoped, but was ultimately held back by the poor relationship between my big hands and the controller's small form and centered sticks.

Brutal Gamer's Nintendo Editor began his gaming life a little late- at five years old. But he's made up for it in the two decades since, gaming and writing about gaming with the same passion, fervor, and unrelenting love as his five-year old self.
Previous Ematic Protective Carrying Case Review
Next Tom King off Batman, on new Batman/Catwoman book