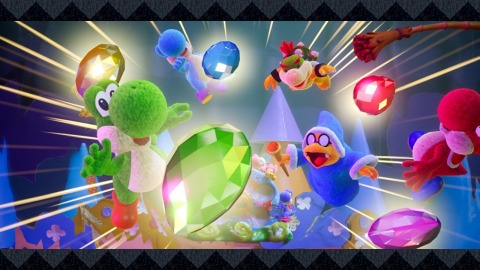 One of Nintendo’s bigger releases of 2019 hits this week with Yoshi’s Crafted World. It’s joined by Darksiders, Power Rangers, and more.

Pretty clearly, Yoshi’s Crafted World is the biggest game this week to hit the Switch. The title is the first for the little green dino in a while, and continues the “paper/craft” look that Nintendo seems to be in love with.

If you’ve played the free demo, then you know what to expect. If you haven’t, it’s fairly classic Yoshi stuff, but with a homemade spin. In other words, Crafted World looks great and plays well too.

Not that it’s alone this week. There are a whole bunch of quality games hitting the eShop, including Power Rangers: Battle for the Grid, and the original Darksiders.

Jason's been knee deep in videogames since he was but a lad. Cutting his teeth on the pixely glory that was the Atari 2600, he's been hack'n'slashing and shoot'em'uping ever since. Mainly an FPS and action guy, Jason enjoys the occasional well crafted title from every genre.
@jason_tas
Previous Power Rangers: Battle for the Grid debuts
Next New Journey to the Savage Planet trailer released