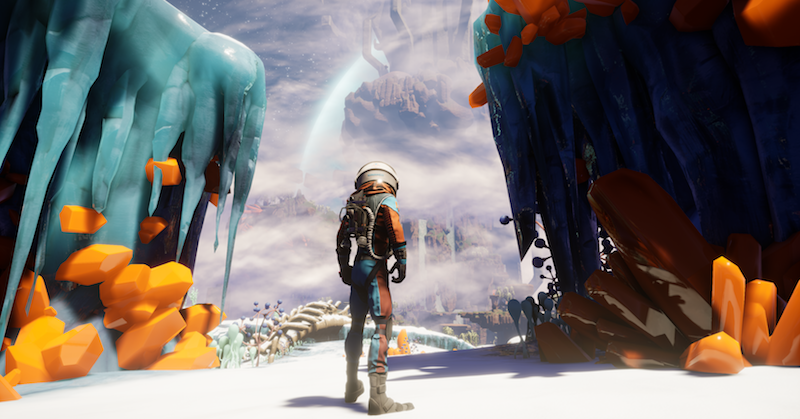 Take a look at Typhoon Studios’ wacky, extra-terrestrial jaunt Journey to the Savage Planet in this new “environmental” trailer.

Basically, this new trailer for Journey to the Savage Planet amounts to a look at the world. But that’s okay, because it’s flat-out gorgeous. Typhoon has crafted a colorful, cartoony planet for your stay in Journey. It’s one that might have you smiling as much as exploring.

Journey to the Savage Planet is an aspirational and upbeat first-person adventure and exploration game set in a bright and colorful alien world filled with weird and wonderful creatures. As an employee of Kindred Aerospace, which proudly touts its rating as the “4th Best Interstellar Exploration Company,” players are dropped onto the uncharted planet AR-Y 26, deep in a fictitious, far-away corner of the universe. Launched with high hopes but little equipment and no real plan, players are invited to explore, catalogue alien flora and fauna and determine if this strange planet is fit for human habitation.

“As a studio we have a deep love of Golden Age science fiction, but it feels like some of the positivity and sense of adventure has been lost in recent years,” said Alex Hutchinson, creative director and Typhoon Studios co-founder. “There are too many dystopias for my tastes, so we wanted Journey to the Savage Planet to give space exploration its sense of adventure back in homage to those early sci fantasies and add a comedic twist. This teaser is just a small taste of what we’ve been working on; we can’t wait to show off more in the coming months.”

Pumped for a trip abroad? Your trip begins on PS4, Xbox One, and the Epic Games Store for the PC in “early 2020”.

Tags Journey to the Savage Planet Typhoon Xbox One

Jason's been knee deep in videogames since he was but a lad. Cutting his teeth on the pixely glory that was the Atari 2600, he's been hack'n'slashing and shoot'em'uping ever since. Mainly an FPS and action guy, Jason enjoys the occasional well crafted title from every genre.
@jason_tas
Previous Nintendo Download: Get Crafty with Yoshi
Next Control goes up for pre-order, gets new trailer