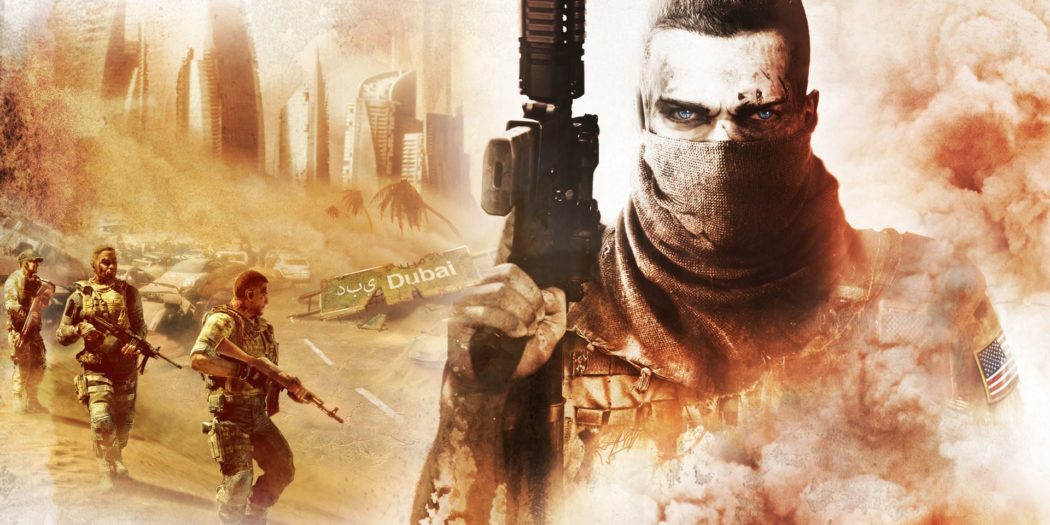 Spec Ops: The Line is a 3rd person shooter released by 2K Games in 2012. It garnered critical acclaim for its unusual portrayal of war and is considered a cult hit. I finished Spec Ops (Campaign Mode) in 2019 to see why it was a commercial flop but a critical success… and I did not expect this…

6 months prior to the start of the game, Dubai had been experiencing the worst sandstorms in recorded history and only the most wealthy and influential had managed to secretly evacuate leaving many Emiratis and foreigner aid workers behind.

Colonel John Konrad, commander of the 33rd Infantry Battalion of the US Army, and his unit were en route back to America from Afghanistan when these storms struck. Konrad disobeyed orders to try and provide relief to the city, deserting with his entire battalion.

The worsening of the storms created a huge “storm wall” that stopped communication, air travel and surveillance. The last communication from Dubai said the 33rd was attempting to lead a caravan out of the city. It never arrived. The United Arab Emirates declared Dubai a no-man’s-land and banned travel to the city. The 33rd were disavowed for treason and no more was heard from the city…

That is, until a looped radio signal is received 2 weeks before the start of the game: “This is Colonel John Konrad, United States Army. Attempted evacuation of Dubai ended in complete failure. Death toll… too many.”

The US covertly sends an elite, 3-man Delta force to investigate Dubai. Captain Martin Walker, the leader of this force, served alongside Konrad and reveres him as a hero. With First Lieutenant Alphonso Adams and Staff Sergeant John Lugo, Walker must confirm the presence of survivors and
immediately radio back for extraction.

Spec Ops: The Line is a cover based shooter. You hide behind things, shoot things, move. You had the standard FPS formula of 2 guns allowed, swappable guns, limited ammo that you’d need to collect from enemies or ammo crates, explosives handled the same way and at times there are turrets you can use.

Adams and Lugo become NPC assistants at killing enemies. You can give simple commands to Adams and Lugo such as shoot that guy and stun those guys. If they get shot too much either you can heal them or get the other uninjured one to heal the other.

The AI is definitely not that great in Spec Ops. Typical NPCs, they’d get in your way at the worst moments, directly lining up to be killed by you, alerting the enemy, walking into enemy fire ahead of you etc.

Movement through environments in Spec Ops is a bit different from other games, in 2012 and even now in 2019. It’s surprisingly good. At times, it’s seamless to transition from cover to cover. Leaving a wall, or swapping sides of a doorway, vaulting over barriers; all of it is very natural when it’s working.

There are times when, either because of clunky controls, human error, or bad nav mapping, your movement can tear the immersion out of you and end up killing you. A few times I had trouble reconciling the unusual keyboard layout, [Left Shift] was used for vaulting and [Spacebar] for sprinting. I had issues running and then sticking to cover (this is usually automatic – otherwise it is prompted by [Spacebar]) – often standing behind the wall and watching bullets rip Walker to bits.

Spec Ops has clunky, rough gameplay and, at times, has some issues when NPCs are talking. I laughed my head off in a particular instance. After accidentally shooting Adams, I died under a rain of bullets, only to hear him say “You’re a dead man!”. The dialogue can be super cheesy or cliche too. AI, as stated earlier, is not the best. The camera during certain cutscenes is also super shaky and can get annoying.

There are still fairly big bugs after nearly 5 years: enemies standing still in place (rarely), a level that I had to restart twice despite killing all enemies (I waited for them to move up rather than killing them ‘too fast’?), Walker pushing Adams onto the top of a pillar he couldn’t move from until I reached the next cutscene (I never tried this again).

I also didn’t even bother with multiplayer since all the praise leveraged at Spec Ops was for its story and the opposite for the multiplayer. Somehow people are still playing it now… 5 years later!

Spec Ops has an extremely interesting setting and, despite the graphics being outdated, the setups are grand and felt intense. Dubai is well known as being a symbol of wealth. You fight through fallen skyscrapers with beautiful furnishings, downed aircraft, sports cars, sandstorms, dunes and surviving settlements built from the rubble.

An added element of gameplay which improved immersion was how you could shoot out windows with sand behind them, drowning your enemies in sand. Enemies can also break through glass roofs. The sandstorms worked to this effect as well disrupting enemies and limiting your range of vision.

The narrative direction of the game was rarely heard of at the time: critique of US military presence in a foreign country, the horrors of war, etc. At times I did think the dialogue or events were overdone a bit. But perhaps they were done like that as a bait and switch? Spec Ops was intended as an antithesis of games that glorify war and death after all so maybe it was done ironically.

The story is intense (and I really don’t want to say too much so I’ll try my best to give you a good hook). You enter this unknown territory and have no idea of the events that have taken place since the last communication. As you play through the game, things will get more interesting, confusing and shocking. The presentation of certain, important events is done so well you’d put them on a good movie’s level. The framing, the colors, the audio – where it counts, the developers took a lot of care.

Walker and his team get physically more and more spent – wounds, dirt and stress build up over time and can be seen on their faces. Even the main menu becomes more ‘distorted’ as you finish chapters. You learn bit by bit the secrets of what happened and is currently happening… Until, at last it comes to a beautiful, amazing end.

Seriously, the worst thing that can happen to you before you play this game is to get the ending spoiled. I am so glad I played blind. I am now going out and asking other people to play because honestly it’s amazing. Perhaps not as a “game” but as an “experience”.

Games can tell stories like no other because you, the player, are actively pushing the story forward. You are the one who is “making the decisions”. The one “pulling the trigger”, setting off flags, starting new chapters, becoming a part of the story. You feel it. You are it. Spec Ops: The Line is one of those games where you wish you could forget it…

So you can feel it all over again for the first time.

Spec Ops: The Line would have been another generic cover based shooter had it not been for its outstanding story, theme and presentation. Short but sweet, clunky gameplay is made up for by a strong narrative and satisfying feel when completing chapters.

Megan here! I am pretty well versed in all things weaboo and geek. I've loved videogames since I was born and even made my own for my 3rd year of Multimedia at the University of Pretoria in sunny South Africa. I have enjoyed anime from the days when Pokemon was considered satanic and Aniplex used to exist on DSTV. In the past couple years I have really gotten into manga, particularly Berserk to see where the story headed after the original anime. If there's one thing I will always love 110% it is cats. Don't doubt my faith in my love for felines.
Previous Classic Karate Kid figures coming up from Icon Heroes
Next Sekiro: Shadows Die Twice launch trailer arrives