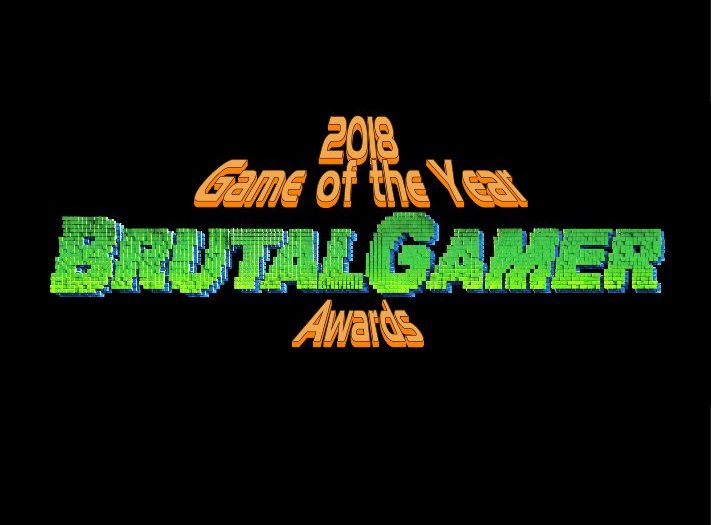 Brutal Gamer Awards 2018: The Games of the Year

This is the big one. At long last, with all the other categories in the books, BG announces its picks for Platform Bests and the Game of the Year.

Welcome to the tops

Here we are, finally at the Game of the Year reveals for 2018. It’s been one heck of a ride, with looks at categories like Best Action Game, Biggest Disappointment, and more. But al of that is over and done, and we’re ready to move onto the biggest awards of the year.

So without further introduction, let’s open things up with the Xbox One Game of the Year…

Microsoft’s Xbox One didn’t have a year filled with exclusives. Actually, it barely had any, let alone ones that you could consider triple-A. And yet, the Xbox remained a favorite of many gamers, and the Xbox One X console is still home to the best-looking graphics around.

With that, some games sparkled just a bit more on the X than on other platforms. Good looks though, will only get you so far. A winning campaign, great gameplay, top flight sound and more all need to coalesce to create something truly legendary.

Our nominees for Xbox One Game of the Year are…

Few open-world games have looked as good as Assassin’s Creed Odyssey. Ubisoft’s soft-reboot for the franchise is the best looking AC yet, and stunned on the Xbox One X.

The game also reinvented the familiar Assassin’s Creed gameplay with a new combat system and added role-playing elements. Your character can now actually interact with NPC’s in meaningful ways by directing conversations and more.

It’s a layer that’s always been missing from AC in general, and is a very welcome addition for Odyssey. ACOd is also the Assassin’s Creed that just keeps on giving. Well, it is if you buy the season pass anyway.

With a year of new campaign content and more planned throughout this year, it’s easy to see why Ubisoft won’t have a new AC title on store shelves this Holiday. Odyssey is just that massive.

It’s a tremendous addition to anyone’s gaming library, and our Xbox One Game of the Year for 2018.

While the Xbox One mainly relied on third-party games for its 2018 slate, the PS4 sprinkled in some truly incredibly exclusives. Among those were Marvel’s Spider-Man and God of War.

If you’ve played any of Sony’s exclusives before, then you know what you can expect. Exclusives on a Sony platform can be some of the best looking and playing games out there, bar none.

Honestly, this year was a tough one, with almost too many to pick from. Nonetheless, choose we did.

Defeating all comers for our GotY choice is God of War. The game saw one of Sony’s best loved series’ reborn with a vengeance, offering new gameplay and an almost completely re-envisioned Kratos.

Mostly gone is the anger-driven god of war, and in his place is a much more well-rounded character, complete with a son (who somehow doesn’t manage to get in the way of the gameplay).

In the end, there was only one game that came close for Game of the Year on PS4, and even that couldn’t stand up to the man with the axe.

Switch Game of the Year

What a couple of years for Nintendo. Fresh from the complete debacle that was the Wii U, Nintendo rebounded in a monster way, producing a console that’s taken the gaming universe by storm.

A revolutionary form-factor, a star-studded series of first-party releases, and a renewed focus on third-party games all worked to make the Switch a winner. Last year saw more of what made the console’s freshmen year such a success, and that includes some excellent titles.

Much like our PS4 choice, picking a Switch game for GotY wasn’t easy. Two games split the vote exactly, and you know what that means – the second tie of the 2018 BGA’s.

We try not to do too many ties here at BG when it comes to votes like this, but this one couldn’t be helped. The staff voting split right down the middle, ignoring everything else.

It’s understandable though, since both games are solid top tier releases, as different as they are in content.

Octopath Traveler is an RPG, and one in the grand old style of the SNES. Imagine Final Fantasy III, but done with graphical flourishes that are only possible today. Combine that with a unique story that follows 8 individual tales, and you have an idea of what it’s like to play Octopath.

Super Smash Bros Ultimate on the other hand, probably needs no introduction or exposition. “Ultimate” is a proper word for what gamers get with this one, as it’s simply the biggest, deepest, and most involved Smash ever.

Both games are worthy of the title of GotY for the Switch. So in the end, they both got just that.

As usual, the PC played home to the most diverse selection of titles and genres in 2018. The personal computer also held strong on exclusives, with some great stuff that simply doesn’t exist elsewhere.

That’s nothing new of course, and has led many a gamer to prefer the seemingly always prophesied-to-fail platform. This years selection of nominees for PC Game of the Year are just what you’d expect, greatly varied.

I know what you’re thinking, didn’t Conan Exiles come out a long time ago? Well, the answer to that is both yes and no. Exiles was in Early Access for a a while before finally seeing what you could term a ‘retail release’. That finally happened last year though, and it was worth the wait.

Exiles doesn’t allow gamers to play as the title Cimmerian, instead optioning for a created character. Your task is to then build that warrior, and create… well actually you can create whatever you want, from small dwellings to your own keep. You can even assemble your own fighting force to defend it.

Add to that the ability to call on gods, some excellent graphics, and a solid combat system, and you have a game that can eat up the hours in a very big way.

Conan Exiles is engrossing, easy to get lost in, and just plain old fun. It rounds out our platform-specific picks for 2018’s GotY.

This is it. We’ve gotten through all the rest of the BGA’s and now we’ve come to the ultimate prize, the Game of the Year. Much like some of the other categories for 2018, the overall GotY was hotly contested within BG’s ranks.

Almost all of the games we nominated garnered at least one vote, though this poll did in fact result in a top title. No ties here.

Our nominees for Game of the Year are…

Does whatever a spider can indeed. The winner of three BGAs, Marvel’s Spider-Man is easy the best Spidey title to hit any platform in years. The game built a wholly new continuity and universe for its own version of Spider-Man to inhabit, and it was flat-out incredible. Or, actually, make that amazing…

With gangs to foil, random crimes to stop, and a cadre of super villains to smash, Marvel’s Spider-Man created a phenomenal story that served as origin for a fresh series. And while it’s all new, there’s plenty here for long time Spider-Man fans to dig into and still be surprised by.

The game also excelled visually with the biggest and most visually impressive Manhattan ever. Sure, it would have been cool to swing into Queens too, but this playground is simply the best ever to feature in a Spidey game. And if you want to go further, it’s probably the best to be in any open-world game that’s set in a city.

As we mentioned in a previous BGA segment too, the cast of Marvel’s Spider-Man is top notch. Every character sounds true to the original comics, none more so than the web-head himself, played by Yuri Lowenthal.

This one has everything you’d expect and then some, even a Stan Lee cameo. It’s our pick for the very best game of 2018.

Platform of the year

While that’s the bulk of the awards, there is one final one – Platform of the Year.

It’s here that we honor the gaming platform that ruled supreme in the previous year’s time. Last year, we face the nod to the Nintendo Switch, having arrived onto the scene and basically taken over.

In 2018, the Switch was still rolling, selling boatloads of consoles and releasing some excellent games. It’s an excellent platform to be sure, but did it take the gold for the second year in a row?

Our nominees for Platform of the Year are…

After reading through our awards for 2018, it should come as little shock that the PS4 took home our Platform of the Year. It might come as some surprise though, that this was a very close vote.

Then again, maybe not. Our runner up, the Nintendo Switch had a tremendous sophomore showing. In a year that didn’t include Spider-Man and God of War, it would probably have won.

But that was not this past year. The PS4’s lineup was too strong, and it just barely overcame the Switch to take home the top prize.

As such, Sony’s PlayStation 4 our Platform of the Year for 2018.

Jason's been knee deep in videogames since he was but a lad. Cutting his teeth on the pixely glory that was the Atari 2600, he's been hack'n'slashing and shoot'em'uping ever since. Mainly an FPS and action guy, Jason enjoys the occasional well crafted title from every genre.
@jason_tas
Previous Modern Warfare and Witness go free in March 2019 for PS+
Next Covers revealed for first 2 issues of Journey into Mystery