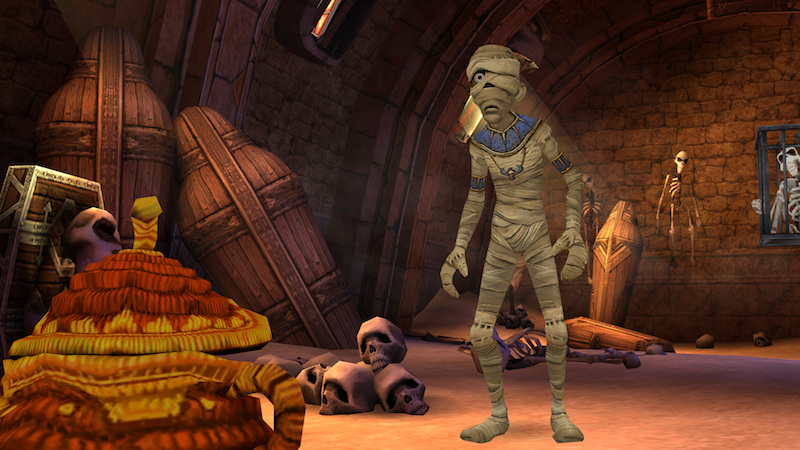 Home / News / Sphinx and the Cursed Mummy unwraps on Switch

Sphinx and the Cursed Mummy unwraps on Switch

GameCube era action/platformer Sphinx and the Cursed Mummy is reborn. The niche game lands on the Nintendo Switch today.

It’s been a while since Sphinx and the Cursed Mummy has been seen anywhere. Originally a game that appeared on the GameCube, Xbox (original), and PS2, Sphinx wasn’t really a big hit.

As I recall, it did enjoy some moderate success though. It looked good, and played well with a fun story. Maybe it’ll fare a bit better now, in what’ll be its second life.

That’s fitting, for game about ancient Egypt and mummies.

A third-person title, Sphinx and the Cursed Mummy put you in the shoes (and wrapping) of two distinct heroes. Sphinx is all about action, and battling foes in traditional action/platformer gameplay, while Mummy’s adventure plays out in stealth sections. Unlike the classic movie monster, this Mummy can’t attack.

Sphinx and The Cursed Mummy is an original 3rd person action-adventure inspired by the mythology of ancient Egypt. Travelling the world via magical portals to foil the evil plans of Set. Sphinx’s Journey will require all his wits, agility, and special powers. He will also rely on his reluctant hero friend, The Mummy, to help when being inconspicuous is the only solution. By finding the stolen magical crowns of Egypt, Sphinx can stop Set and save the world.

From THQ Nordic, Sphinx and the Cursed Mummy is available both on the eShop and in physical form. It’ll run you $29.99 USD.

Jason's been knee deep in videogames since he was but a lad. Cutting his teeth on the pixely glory that was the Atari 2600, he's been hack'n'slashing and shoot'em'uping ever since. Mainly an FPS and action guy, Jason enjoys the occasional well crafted title from every genre.
@jason_tas
Previous War of the Realms to get a “van art” cover
Next New Walgreens-exclusive Kingdom Hearts figures arrive