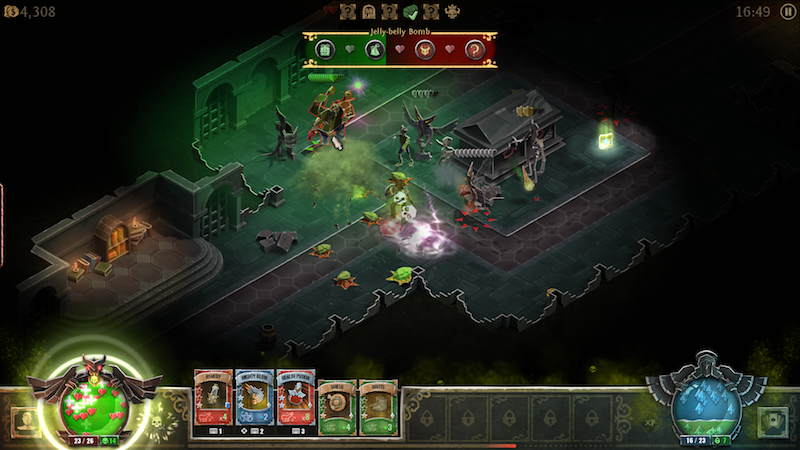 Paper Diablo? Somewhat, though it’s not quite what you might think it is. This aRPG is actually pretty fresh experience, with some very cool touches.

I have to admit that I didn’t really know what Book of Demons was before I volunteered for the review. I’m a big fan of action-RPGs like Diablo and Inquisitor-Martyr, and I had just assumed that’s what this was from the way it looked.

Along with that, the trailer was so cool I just couldn’t resist when the title came into our offices.

Pretty neat right? I thought so, but while I haven’t changed my mind on that nifty little tune, the game is not what I though it’d be at all. It sort of is an aRPG, but not strictly in the traditional way. The whole thing plays more like a real-time board game, which is kind of neat considering the paper motif. More on that in a second though.

Honestly, if you watched the video above then you already have a good idea of the story in Book of Demons. But just in case you didn’t check it out, then you should know that it’s fairly standard, though with a twist or two.

Book of Demons starts out with the player entering a town as a stranger. As you might guess, that character immediately gets embroiled in the horror that’s enveloped said town. And, as horrors go, it’s kind of a cool one.

Seems the Bishop of this particular county made a deal with a big, bad demon. As you can imagine, things didn’t go well. Things are moving in the shadows, people are vanishing, and the town’s populace is terrified to leave their homes. So it’s not the best.

Your job, of course, is to brave the tunnels beneath the cursed cathedral that sits at the epicenter of the demonic incursion. You alone must fight your way through, and smite the demons therein. It’s nothing cutting edge, but it gets the narrative-job done.

So here’s where things get decidedly unique. And it’s going to be up to you whether or not you like the brand of “uniqueness” that Book of Demons offers. Though of course I’ll give you my take too.

Yes, this is an action-RPG, but it’s not how you think. All of the characters in the game are made to look like paper cutouts. But to me, BoD plays like a board game. As I mentioned all of the action is in real-time, as is movement, but you’ll walk along pre-set paths. So in a way, it’s like you’re “on rails” or playing an actual tabletop game that only offers set paths around its map. If that sounds weird, it’s because it kind of is.

Enemies are not restricted by the same paths that you are however, and can move freely. So how do you hit a bad guy standing a ways back from the path? You just do, that’s how. Clicking on enemies will cause your character to attack them just like in a game like Diablo, but you don’t have to be standing right next to them for that to happen. Same goes for chests, environmental objects and anything else in BoD’s levels. Again, it is kind of odd, but the formula works regardless and is still fun.

While Book does play with genre conventions, all the other trappings of the aRPG are present. You have a few classes to play, you can upgrade your character, and there are copious amounts of loot. There’s even a cool card system that plays into the loot.

So most, if not all, of the stuff you like about aRPGs is front and center.

Book of Demons takes some interesting routes to play out its tale, and that includes in the visual department. But unlike the rest of it, which might take some getting used to, the looks are A+ all the way.

I loved everything about the visuals in this game, including the paper cutout-type characters. True, nothing is really animated to any great degree, but that’s not a knock. It was a design choice, and one that actually makes Book of Demons stand out in the crowd.

That said, would I have preferred animated characters? Of course. And I would have liked it if you could explore the town a bit too, instead of it basically being just a static screen with dialog choices. But all of that fits within the style of the game, and what developer Thing Trunk obviously wanted to do with it.

I will tell you too, that BoD is packed with detail and has charm to spare. That latter being not all that common of an occurrence in the current industry.

Book of Demons is an aRPG that’s probably not for everyone. If you’re into visual spectacles this probably isn’t for you. Likewise, if you like the formula that the genre set up long ago and don’t really feel like deviation is necessary, then you might not be in love either.

As a fan of that genre though, I have to say I’m having fun with this game. It’s not as intense, and not as frenzied (though some sections are definitely tough) as other games, but Book of Demons has its own thing going. And in that way I think it’s definitely worth a look for those who might be seeking something a little different.

I still honestly don't know if Book of Demons is 100% my cup of tea. Thing is, I'm actually having fun with it despite that. I could definitely see it becoming one of those games that I might keep going back to as well. The controls are great, the graphics are terrific, and if you can get used to the style of adventure that it offers, you might find yourself wrapped up in this one too.

Jason's been knee deep in videogames since he was but a lad. Cutting his teeth on the pixely glory that was the Atari 2600, he's been hack'n'slashing and shoot'em'uping ever since. Mainly an FPS and action guy, Jason enjoys the occasional well crafted title from every genre.
@jason_tas
Previous Previews to get exclusive One:12 Hal Jordan Green Lantern
Next Nintendo touts indie lineup in new compilation video