Batman ’89 fans take note, Mezco has a winner of a variant ready for pre-order. It’s the Sovereign Knight – Onyx Edition.

Not a company to shy away from a few variants, Mezco has a winner of an alternate already for this very figure. While the standard Sovereign Knight is no slouch, there’s a classic blue and grey version too. Unlike a similar variant for their first Bat-figure, that one even has the yellow oval bat-symbol. It’s pretty much everything an 80s Batman fan could want… and then comes this.

The Onyx Edition of the Sovereign Knight follows up on that first variant with an all-black bat-suit… also with the yellow oval. So you’re basically getting a Michael Keaton-era movie Batman here, just without the name. The utility belt and accessories even have a coppery-gold color scheme to complete the look.

Can I rationalize buying three versions of the same figure? You bet I can.

Sovereign Knight – Onyx Edition is available right here, and will ship out in the February to April, 2019 time frame. Scroll down to see what’s included. 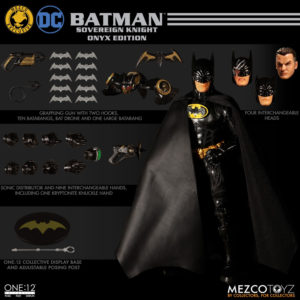 Each One:12 Collective Sovereign Knight – Onyx Edition figure is packaged in a collector friendly box, designed with collectors in mind.

Jason's been knee deep in videogames since he was but a lad. Cutting his teeth on the pixely glory that was the Atari 2600, he's been hack'n'slashing and shoot'em'uping ever since. Mainly an FPS and action guy, Jason enjoys the occasional well crafted title from every genre.
@jason_tas
Previous ioGear Wireless HD Digital Kit (Hardware) Review
Next Project Highrise: Architect Edition (Xbox One) Review