What does 2019 hold for Marvel’s X-Men? Some high strangeness from the looks of it, as Age of X-Man dawns after Uncanny’s Last X-Men issue. 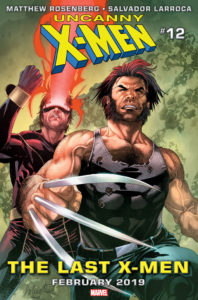 Last week we told you about Devastation, a single issue arc that would be hitting the just relaunched Uncanny X-Men in 2019. Now we know a little more about that, as a returning Cyclops will be paired with the reborn Wolverine in Uncanny #12. That’ll be called The Last X-Men.

This is forever.” – Matthew Rosenberg

Sounds pretty interesting. And it’s also cool to see two of the most iconic X-Men back in action, together. Even so though, there’s something hitting after it that sounds even more intriguing. And, honestly, super-weird.

We’ve had Age of Apocalypse and Age of Ultron before, and now we’re on the eve of Age of X-Man.

If you’ve been reading Marvel’s X-books as of late, then you’ve seen the events surrounding Cable. If you haven’t, then all you really have to know is that Cable was murdered by a younger version of himself. Apparently he blamed himself for allowing the timestream to become polluted with the likes of the time-displaced X-Men. Can’t blame him really.

Just before that though, Cable teamed with the Age of Apocalypse refugee that is his younger self, Nathaniel Grey or X-Man. And now it looks like that particular version of the Summers kin is back in a very big way. Like, in a “take over the Marvel Universe and replace it with his own thing” kind of way.

The story will play out (so far) in a series of mini-series’ beginning in February. Each will run five issues, so this is a big time event series. Oh, and each one looks… well they all look really, really, weird.

The Age of X-Man dawns…and the X-Men cannot stop it.

After the apocalyptic dissolution of the X-Men comes…AGE OF X-MAN!

Jason's been knee deep in videogames since he was but a lad. Cutting his teeth on the pixely glory that was the Atari 2600, he's been hack'n'slashing and shoot'em'uping ever since. Mainly an FPS and action guy, Jason enjoys the occasional well crafted title from every genre.
@jason_tas
Previous Spyro Reignited Trilogy (Xbox One) Review
Next New lineup of X-Men Milestone books coming up