Home / Action Figures and Toys / John Stewart becomes the first Green Lantern in the One:12 Collective

John Stewart becomes the first Green Lantern in the One:12 Collective

Green Lantern fans waiting for one to hit Mezco’s One:12 Collective finally have one. Classic Lantern John Stewart is up for pre-order.

One of the oldest Lanterns in the DCU, John Stewart is second only to Hal Jordan himself in terms of tenure. Not only has he been around for a while, but Stewart has become a real fan favorite.

His popularity skyrocketed after he starred in the Justice League animated series, and it’s pretty much stayed that way. Depending on who you’re listening to, he might even be featured opposite Jordan in a big budget Lanterns movie. So it’s understandable then that he’s the first Lantern chosen for the One:12 Collective.

Not that I wouldn’t have wanted a Hal Jordan before Stewart, but if he’s who we’re getting first, I’m down. As usual with the One:12, this figure will be packed in with a bunch of cool accessories. And as we’ve seen lately, he’ll sport light-up features as well.

You can expect John Stewart to arrive some time in the May to June (2019) timeframe, and you can pre-order one here. 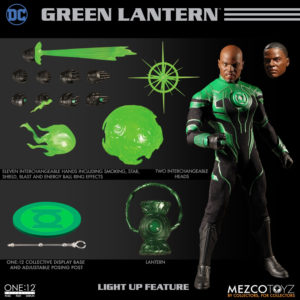 Jason's been knee deep in videogames since he was but a lad. Cutting his teeth on the pixely glory that was the Atari 2600, he's been hack'n'slashing and shoot'em'uping ever since. Mainly an FPS and action guy, Jason enjoys the occasional well crafted title from every genre.
@jason_tas
Previous The new year will be bringing Devastation! to the pages of X-Men
Next The first season of Krypton comes home this March