Back from the dead? Daredevil’s new creative team revealed

Is Daredevil dead, or isn’t he? While his fate might be undecided, the status of his book isn’t. A new team takes over this February.

Just who Daredevil might be going forward isn’t clear. Is Matt Murdock still alive, or is someone new set to take on the moniker of Daredevil? In the wake of the Death of Daredevil storyline, we just don’t know. 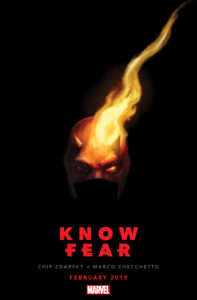 But fans of the iconic Marvel hero might not have to fret, especially if the press release is anything to go by. That’s because, from the sound of it, the devil of Hell’s Kitchen might not be done just yet.

Check out the announcement below, as Marvel takes the wraps off of the new creative team of Chip Zdarsky and Marco Checchetto.

Writer Chip Zdarsky (Peter Parker: Spectacular Spider-Man, Marvel’s 2-In-One) and artist Marco Checchetto (Old Man Hawkeye, Hunt For Wolverine: Dead Ends) will step into Hell’s Kitchen following Charles Soules’ memorable run, while inheriting the legacy of pulling Daredevil out of an impossible situation. But with the Death of Daredevil, how will our hero’s story continue?

You’ll have to wait until February to find out!

For more information about DAREDEVIL #1 and to watch the announcement, check out Marvel.com!

Jason's been knee deep in videogames since he was but a lad. Cutting his teeth on the pixely glory that was the Atari 2600, he's been hack'n'slashing and shoot'em'uping ever since. Mainly an FPS and action guy, Jason enjoys the occasional well crafted title from every genre.
@jason_tas
Previous The first season of Krypton comes home this March
Next New Marvel Gallery statues and more hit this week from DST