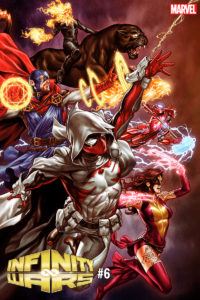 I have to admit that I dropped out of Marvel’s big summer/fall event around issue 3, so I’m a little lost on this. What happened after that does sound kind of neat though, with some interesting themes at play.

When Gamora used the Infinity Stones to fold reality, she created a new universe…and the mind-bending, unique heroes known as the Infinity Warps! This December, the Infinity Stone story that changed the lives of those who wielded the cosmic gems will come to a spectacular end, and Marvel is excited to reveal a new variant cover from acclaimed artist Mark Brooks!

Issue #6, which is what we’re looking at today, is actually the close of the story. So all of the setup will be leading into this one, which includes the Warps in an apparently big way. Not that I’ll probably go back and pick up the issues I missed, but I might have to see how things end up, especially since this will lead into the reformation of the Guardians.

As for today’s news though, that’s all about the imagery that Marvel is showing off. And of course, that’s from Mark Brooks. This is the standard cover, and it (oddly) doesn’t look like there are an variants planned. It’s pretty cool looking too.

Watch for it on the stands this December the 19th.

Jason's been knee deep in videogames since he was but a lad. Cutting his teeth on the pixely glory that was the Atari 2600, he's been hack'n'slashing and shoot'em'uping ever since. Mainly an FPS and action guy, Jason enjoys the occasional well crafted title from every genre.
@jason_tas
Previous Nintendo’s Smash Direct highlights insane amount of details and reveals
Next Pre-order Darksiders III: Blades & Whip Edition, get the first two games free