Home / Action Figures and Toys / One:12 Freddy’s coming for you. Mezco details their latest horror figure

One:12 Freddy’s coming for you. Mezco details their latest horror figure

A timely announcement from Mezco Toyz this Haloween, as the company unveils their Freddy figure from A Nightmare on Elm Street.

There’s a nightmare, on MY street!

Add Freddy here to your One:12 Collective shelf, and you can indeed have your own little nightmare. Though, if you do, it probably won’t be because you’re disappointed. That’s because Mezco’s latest take on Freddy looks flat out awesome.

Joining Michael Myers and Ash, Freddy will be the latest addition to the company’s horror-themed wing of the Collective, and he’s going to be stocked with a ton of great accessories. That includes a whopping four head-sculpts. That, friends, is awesome.

Freddy is due to ship out just a bit before Halloween of 2019, hitting some time in the July to September timeframe. You can pre-order him right now though, at the link below. 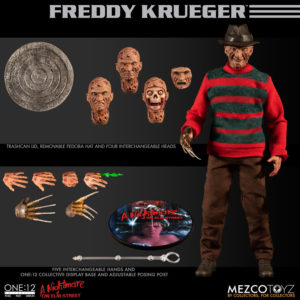 Each One:12 Collective Freddy Krueger figure is packaged in a collector friendly box, designed with collectors in mind.

The One:12 Collective A Nightmare on Elm Street: Freddy Krueger is available for preorder at http://mezcotoyz.com/one-12-collective-freddy-krueger.

Jason's been knee deep in videogames since he was but a lad. Cutting his teeth on the pixely glory that was the Atari 2600, he's been hack'n'slashing and shoot'em'uping ever since. Mainly an FPS and action guy, Jason enjoys the occasional well crafted title from every genre.
@jason_tas
Previous ‘Evil Dead 2’ Ash (Action Figure) Review
Next Fresh Nightmare Before Christmas and more hit today from DST