The king of the dinosaurs stars in this surprising new graphic novel from Rextooth Studios. It’s a family tale, set some 65 million years in the past.

Writing for a giant

I’d probably go so far as to say that there’s almost no one alive who doesn’t know what a Tyrannosaurus Rex is. The tyrant king has to be one of the most well-known of the dinosaurs, and is also one of the oldest discovered.

Something that might be a little shakier though, is just how many people have kept up to date with the famous dino. Family relationships, hunting and social habits, and even a feathered look have evolved over the years. If you haven’t kept current on all of it, then the modern picture of a Rex might be a little surprising.

Needless to say, author Ted Rechlin is shocked by none of it. He’s pretty clearly a fan. Getting his start as an artist for DC Comics, Rechlin has since gone freelance, putting in work for not just DC, but also the likes of Skyhorse and Dover.

For this book, as well as his award-winning title Jurassic and his Sharks: A 400 Million Year Journey book, Rechlin has done pretty much everything. He sits at the top of Rextooth Studios, as author, illustrator, and creative director.

Though he’s written about Sharks and dinosaurs in general, it certainly seems as though it’s the Rex that he’s the biggest fan of. That definitely comes through in T. Rex Generations. I don’t think I’ve ever seen the fierce animal treated with such care.

“There isn’t an established genre for graphic novels about natural history and wildlife. And with science education my top priority, it was a natural to portray T. rex, the most well-studied dinosaur of all time,” says Rechlin. “Dinosaurs are complex animals who are far from the slow, stupid and tail-dragging lizards they were originally viewed as. Recent research suggests that T. rex was likely a very intelligent animal who was capable of social behavior and problem solving. I used this research as the basis for the family group of T. rex followed in my books.” 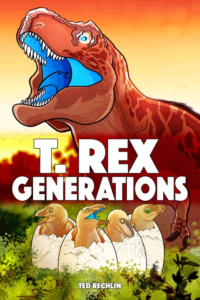 The story of a king

By the title, it’s probably easy to see where the story in this book actually leads. We don’t just follow one Rex, but a whole family of them. When the story opens, we see a mated pair, complete with nest of chicks to care for.

What follows is one of the more interesting human-less tales I’ve read. There’s a generational story at play, so we get to see not just the parents, but also how young Rex’ not only grow up, but also hunt and associate with each other. While some of this is presumably educated guesswork, it all comes across well and is easy to follow.

It’s also easy to empathize with the dinos, and I mean even the ‘enemies’ of the Rex family. Credit for that, as it would have been easy to make this more or less a lightly narrated educational tome. But that’s not the case as there is an actual story present, complete with quite a bit of peril. Kids in-particular should get quite a kick out of it.

And yes, as I’m sure you’re wondering, it is safe for kids, though there are some implied elements that take place “off-screen”. This being a book about predator and all, there are certain things that had to be included. But those are not shown in any kind of detail. So young readers should be just fine with it.

Rechlin was an illustrator for DC, which is a major comic book publisher. So it should come as no surprise that T. Rex Generations is pretty good looking. The illustrations here are nicely stylized, with a fair bit of detail.

They’re comic book flavored, and in some cool ways. While T. Rex Generations doesn’t showcase superheroes, dinosaurs are over the top by their very nature. So Rechlin’s style lends itself nicely to the big and bold images that are splashed across almost every page.

Also excellent is the color work. The vivid tones of these monstrous creatures accentuates the visuals nicely. They pop off the page and should be a joy for any kid (or dino-loving adult) to page through. Oh yes, that’s another element that I feel like I should mention.

While this is a narrated book, you don’t have to read the words for it to be enjoyable. I feel like the imagery would be fun for any kid to look at, even if they’re not of reading age. For that matter, it’s just a fun read-through in general, for child or adult alike.

A fun story that's easy to follow, and is actually informative - 84%

I really dug this book, no pun intended. T.Rex Generations is a fun, colorful, and cool looking trip through time with a family of some of the best-loved dinosaurs ever. With great-looking visuals and a cool story, adults can actually enjoy this one too, I definitely did, though it's a gem of a book for a child.

Jason's been knee deep in videogames since he was but a lad. Cutting his teeth on the pixely glory that was the Atari 2600, he's been hack'n'slashing and shoot'em'uping ever since. Mainly an FPS and action guy, Jason enjoys the occasional well crafted title from every genre.
@jason_tas
Previous The Red Dead Redemption 2 launch trailer is here
Next Get in the Halloween mood (and pick up a few creepy goodies) at Megalopolis