A dark and intriguing mystery surrounds the main characters in Shadows: Awakening. This action RPG is an exciting adventure in a land full of lore. While Shadows’ gameplay is similar to Diablo 3, there are a few things that make this game a unique adventure worth playing. The story begins in a deep and dark tomb full of the undead.

Meet The Hooded Man And The Devourer 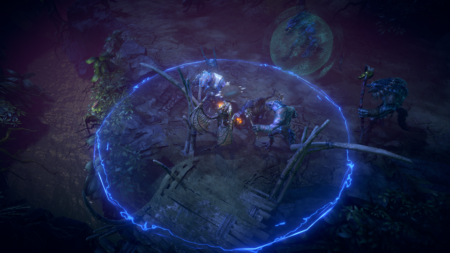 The game starts off with a mysterious hooded man. He is old and he is on a mission, but he cannot complete his mission alone. The Hooded Man reaches out to the undead spirit, the Devourer, and together they form an unlikely alliance. This is when the players are introduced to the Shadow Realm, one of two realms players will be traversing throughout the game. In the Shadow Realm, the Devourer will have to battle other creatures and spirits of the undead, but that is just half of the game. The Devourer will have to choose a mortal puppet and together, the uneasy duo will have to figure out who is the Hooded Man.

Walk The Mortal Realm With A Mortal Puppet

The first choice players will make will be which puppet to pair up with the Devourer. These three mortals are typical archetypes, a mage, a barbarian and an archer. The Devourer must pick one of the puppets to work with in order to complete his mission. Each puppet has an interesting backstory and will play an integral part of the story moving forward. Once the Devourer picks a partner, the real game begins. An interesting gameplay mechanic opens up as players can now switch back and forth between the Shadow Realm and the mortal realm. This is a fun mechanic and makes for unique gameplay. It reminds me of Outland, a side-scrolling platformer game where the player could switch back and forth between two colors to progress through the level. Now there is obviously a lot more depth to this mechanic in Shadows: Awakenings, and it was developed rather well. 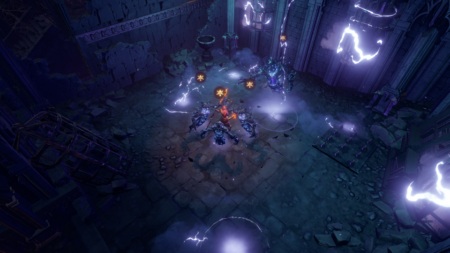 While switching back and forth between realms, players will be able to traverse new paths. There are also missions that exclusively available to the Devourer, and these missions will only be available while in the Shadow Realm. Battles with monsters are also affected by switching back and forth between realms. Early in the game, players will be tasked with killing a creature and the only method to kill it is by using both the Devourer and puppets abilities in a killer combo. Even treasure chests vary between the two realms. While in the mortal realm, there are normal chests to unlock. While in the Shadow Realm, the Devourer can only open these floating crystals to reveal the loot inside.

Give Me All The Loot

What is an ARPG without the loot? Well, it probably wouldn’t be an ARPG – but not to worry, there is plenty of loot to collect in Shadows: Awakening. Each character has their own set of armor along with the weapons they are allowed to use for combat. Similar to Diablo, each class has its own set of usable wear, but these items are limited in scope. While it was cool to see my character equip a piece of armor, there is only one type of armor for each slot. For example, there is a helm for the Barbarian’s head. Though there is only one type of helm and not a plethora of options to further customize your character. Each piece of armor is also ranked by rarity. While it is nice to have some customization between classes, I found the single piece of armor rather limiting.

The Good of Shadows: Awakening

There is a lot to like about Shadows: Awakening. The action is fast-paced and chopping up monsters is a blast. The story is intriguing and there is a lot of content. One play through of the story tops out around 20 hours. There is a lot of replayability by switching puppets and completing the side quests. Playing through these can push out the gameplay to between 40-60 hours. So while the actual game is enjoyable, there are some not so enjoyable things as well.

The Bad of Shadows: Awakening

As outlined above, the limits to customization for each character distracts from the normal ARPG grind. While it is great to find that purple piece of armor or weapon, the fact that it does not change the aesthetics of the characters takes away from the immersion of the game. While my character may become a badass, he is no different than any other players’ characters. This may not matter though as Shadows is strictly a single-player adventure. This takes me to my next point.

The Ugly of Shadows: Awakening

The fact that there is no coop available is a real killjoy for this game. While the gameplay mechanics may restrict the ability to have multiple players, it is still quite lonely to play this game. One of the best qualities of Diablo is the coop availability, which is lacking in this adventure. There is a lot of content to experience, but sadly, players will have to experience it alone. While this is strictly an subjective opinion, it was a real bummer that I could not plop down on the couch and experience this game with my girlfriend. I hate to knock the score down on a game like this, but having coop available would have made this game that much better.

Fun and exciting gameplay mechanics are hindered by limited customization for the characters. Players will have to also experience this adventure in the solo mode.

As a fearful proponent, I agree with out robot overlords on House Bill 10010101 - The Full Extermination of the Human Race. But until then, make sure to check out all my writings on video game stuff.
@@docbrown303
Previous Mezco’s take on Iron Man’s Model 42 armor is live for pre-order
Next The world of The Division expands with Dark Horse’s Extremis Malis